Norwegian oil and gas firm Aker Energy has still not decided whether to use Ocean Yield’s FPSO Dhirubhai-1 for an offshore project in Ghana on not. The parties have now further extended the option period for the potential FPSO charter. 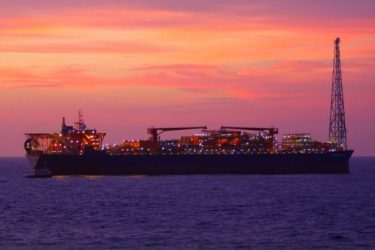 Ocean Yield and Aker Energy have been in talks over the potential long-term charter of the FPSO since February 2019.

Under the previous agreement, Aker Energy had until September 1 to decide whether to charter the FPSO and use it for an early-production project offshore Ghana.

A new agreement has been reached this week, with Ocean Yield saying the deadline has now been pushed forward.

The FPSO-owner did not provide any details on the amount of the compensation to be received from Aker Energy.

Aker Energy submitted an integrated plan of Development and Operations (PDO) to Ghanaian authorities for the Deepwater Tano / Cape Three Points (DWT/CTP) block in late March 2019. The integrated PDO presents an overall plan for a phased development and production of the resources in the DWT/CTP contract area.

The phased development plan will start with the development of the Pecan field as a firm phase one, being the largest of several discoveries in the area.

Upon PDO approval, the partners will initiate a process to make a final investment decision (FID). First oil from the Pecan field is estimated 35 months after the FID is made.

Back in May, Ocean Yield said that due to uncertainty with Aker Energy, it was in parallel pursuing other employment opportunities for the FPSO.

According to Marine Traffic, the FPSO is currently moored in Hambantota port in Sri Lanka.