The LPG carrier on order features its world-class energy efficiency and outstanding versatility enabling it to flexibly accommodate the requirements of major LPG terminals. Completion and delivery of the newly ordered carrier are scheduled for the second half of 2015.

The LPG carrier to be built at MHI’s Nagasaki Shipyard & Machinery Works, will measure 230 meters in length overall, 36.6m in width and 11.1m in draft, with gross tonnage of 48,300 tons and deadweight tonnage of 51,100t. The ship will have a capacity to carry up to 83,000 cubic meters of LPG. The adoption of MHI’s unique hull design and other features provide the carrier with superlative fuel efficiency and outstanding adaptability to the connecting conditions of LPG terminals.

Astomos Energy presently operates a total of 23 large-scale LPG carriers. All six vessels owned by the company were constructed by MHI; of the remaining 17 time-chartered vessels, eleven were built by MHI. Today Astomos Energy is pursuing a medium-term business plan to expand its LPG transport structure, targeting an increase in gross LPG handling volume from the current 10 million tons per year to 12mtpy in 2015. The order newly placed to MHI is an integral part of that initiative.

With the unfurling of the “shale gas revolution” in the United States, demand to transport LPG produced in North America is projected to increase in the global market, including East Asia. In tandem with market expansion, a trend is also under way toward longer transport distances. MHI’s LPG carrier ordered by Astomos Energy can accommodate these dual needs, augmented by its specifications enabling passage through the newly expanding Panama Canal. 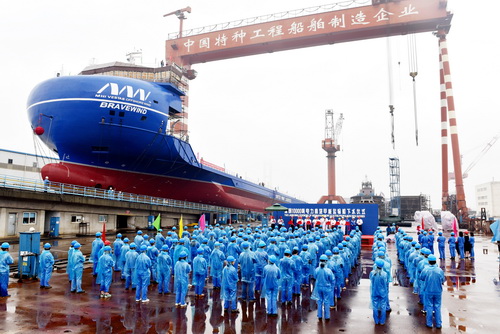