The suspected cause of the fire on board the Liberian cargo vessel APL Austria is a chemical known as “calcium hypochlorite”, the South African Maritime Safety Authority (SAMSA) said citing preliminary investigation findings.

The chemical was found stowed under deck in No.4 cargo hold, where the fire broke out.

Calcium hypochlorite is commonly used for sanitation and disinfection purposes ranging from public swimming pools, drinking water to domestic use.

Nevertheless, the presence of the chemical on board the vessel was somewhat mysterious as the vessel’s crew was “unaware of it as it was not declared as such” , according to Captain Daron Burgess, a Principal Officer at SAMSA southern region office in Port Elizabeth.

Burgess stressed in a statement on Tuesday however that the final report by fire experts has not been released yet, so the cause cannot be confirmed.

Shortly thereafter with rescue operations scrambled, it was redirected overnight back to Port Elizabeth and eventually to its current docking location at the port of Ngqurha. Its crew was evacuated while firefighters battled the blaze.

As disclosed by Capt. Burgess all damaged containers have been discharged from the vessel and the No.4 cargo hold is now empty and being mopped up.

He added that high pressure hose cleaning began on Tuesday and was expected to be completed on Wednesday afternoon after which investigators hope to have a full view of the damage to the vessel.

According to Capt. Burgess repairs to damage caused by the fire on board the vessel were unlikely to be conducted at the Ngqurha port and the vessel might set sail again to elsewhere sometime next week.

“The vessel has had SA repair companies attend to inspect damage and to give quotes for seen damage to ship and hatch covers,” he noted. 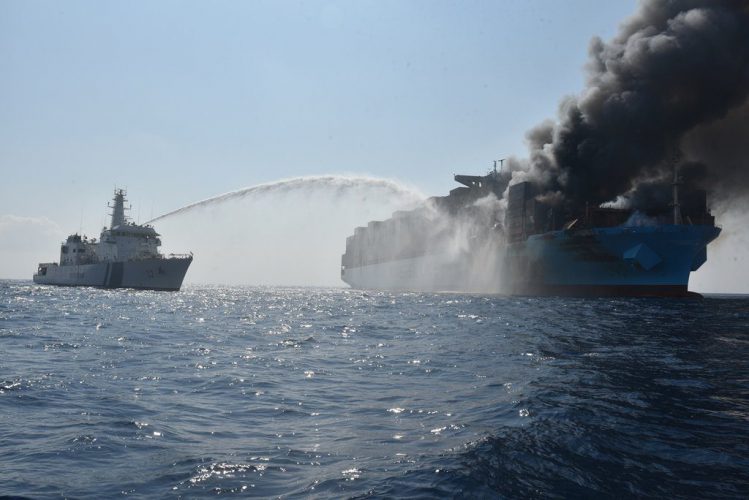