Giant Johan Sverdrup project 70% complete. Break-even down to $15 a barrel

The development of the Johan Sverdrup, a giant offshore oil field in Norway, is 70 percent complete.

According to an update by Statoil, the operator, the North Sea development is progressing according to plan, and investment costs “are continuing its positive trend.”

Johan Sverdrup has expected recoverable resources of between 2.1-3.1 billion barrels of oil equivalent, and is seen as one of the most important industrial projects in Norway over the next 50 years

Phase 1 of the project is currently estimated at NOK 88 billion, which amounts to a reduction of NOK 35 billion or close to 30 percent since the plan for development and operation (PDO) was approved in February 2015.

Break-even is reduced to below $15 per barrel for the first phase of the Johan Sverdrup project.

“Johan Sverdrup is a world-class project and continues to deliver. There is high quality in project execution, the costs are decreasing, and the resource estimate goes up. Johan Sverdrup is now even more robust and valuable for both the partners and society. This is a result of good cooperation between Statoil, our partners and suppliers,” says Margareth Øvrum, executive vice president for Technology, Projects & Drilling in Statoil.

“Johan Sverdrup is also benefiting from the drilling and well improvement program in Statoil. We’ve drilled more wells than planned, more than one year ahead of plan, which has contributed greatly to cost reductions in the project. The wells also make our production plans even more robust and have improved our knowledge of the reservoir. Based on this, we are now able to increase the resource estimate for Johan Sverdrup further,” continues Øvrum.

Since the PDO for the first phase was submitted the range of the full-field resource estimate has improved from 1.7-3.0 to now 2.1-3.1 billion barrels of oil equivalents.

Full-field resource estimate has improved from 1.7-3.0 to now 2.1-3.1 billion barrels of oil equivalents

The Johan Sverdrup project will be developed in several phases, and the PDO for phase 2 will be submitted to Norwegian authorities in the second half of 2018. Further maturation has reduced the estimated investment costs for phase 2 to below NOK 45 billion.

With this, the break-even for the full-field development of Johan Sverdrup has been improved to below USD 20 per barrel.

“The standardization of equipment packages, copying of good solutions, and doing things right the first time – in collaboration with our suppliers – has been critical to the positive developments that we see in the first phase of Johan Sverdrup. In phase 2 we are taking this one step further, and we are starting to see the results of this”, says Kjetel Digre, project director for Johan Sverdrup in Statoil.

A more streamlined operation and maintenance model, combined with increased use of digital and automated solutions, has also helped reduce estimated yearly operating costs by nearly NOK 1 billion or approximately 30 percent since the PDO was approved in February 2015.

“Johan Sverdrup and its 50-year lifespan is a unique opportunity to think big and differently about new solutions. A lot of this – for example sensors that measure the condition of important equipment, or fiberoptic reservoir monitoring – are technologies that we implement from day one. However, it is also about equipping the field for possible future solutions that can further strengthen safety, efficiency and the value of the field over time,” states Digre.

Johan Sverdrup will be developed in several phases. Concept decision for phase 2 was made last year and the selected concept consists of another process platform (P2), modifications to the riser platform and subsea production and injection systems. The plan for development and operation (PDO) for phase 2 will be submitted before September 2018.

Phase 1 is expected to start up in late 2019 with production capacity estimated at 440,000 barrels of oil per day.

Phase 2 is expected to start up in 2022, with full field production estimated at 660,000 barrels of oil per day. Peak production on Johan Sverdrup will be equivalent to 25% of all Norwegian petroleum production. 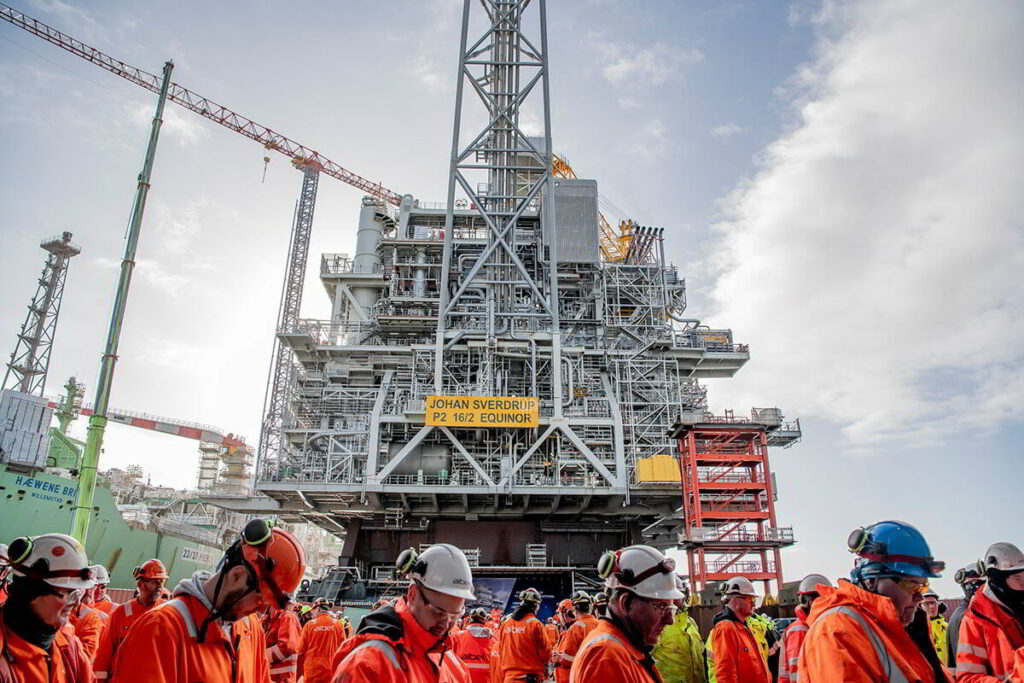