The International Chamber of Shipping (ICS) has submitted a refined proposal to shipping’s UN regulator seeking the establishment of a fund and reward system to accelerate the sector’s uptake of alternative fuels and its transition to a net zero future.

The refined proposal combines elements from its previously proposed carbon tax proposal which was tabled by the International Maritime Organization (IMO) as well as submissions from other countries.

ICS said that the fund could raise billions of dollars annually, which would then be committed both to narrowing the price gap, globally, between existing high carbon marine fuels and alternative fuels, as well as supporting much-needed investment in developing nations for the production of new marine fuels and bunkering infrastructure.

The funding and reward proposal would use a flat rate contribution system calculated per tonne of CO2 emitted by a ship and the aim is to keep the market-based measure relatively simple to avoid market distortion.

The proposal is being made to the IMO ahead of the Marine Environment Protection Committee (MEPC) in November.

“ICS considers the immediate need to ensure that e.g. 5% of the energy used by shipping in 2030 could be produced from alternative fuels by narrowing the price gap with conventional fuels via a rewards programme for CO2 emissions prevented by ships using ‘eligible alternative fuels’. This would accelerate shipping’s transition to new fuels to reach a ‘take off’ point on a pathway to full decarbonisation, whilst allowing the proposed contribution per tonne of CO2 emitted to be set at a quantum that would avoid disproportionately negative impacts on States,” ICS said in the paper.

Under the proposal, all applicable ships will be required to make an annual contribution per tonne of CO2 emitted to an IMO Maritime Sustainability Fund (IMSF) calculated on a tank-to-wake basis for a period of five years. The approach should be re-examined by IMO as part of a five-year review, to be completed within three years of the measure entering into force.

ICS added that with ‘political will’ the fund and reward system could be established by 2024.

As a result, ships combusting fuels with a lower CO2 conversion factor, such as LNG or methanol, would make a smaller contribution compared to ships that only use liquid fuel oil. Some alternative fuels, with a zero carbon factor, including some that when consumed by a ship may be eligible for rewards, will not require a contribution to be made to the IMSF.

For a ship that combusts more than one fuel type, the CO2 emitted from different fuel types should be calculated separately and then aggregated as the basis to calculate the total contribution.

The data to support the implementation of the IMSF contribution system will utilize the existing IMO Fuel Oil Data Collection System (DCS) for fuel oil consumption of ships to minimise the administrative burden on the member states, ICS said.

To help narrow the price gap between conventional liquid fuel oil and “eligible alternative fuels”, the idea is to reward ships from the IMSF based on the CO2 emissions which are prevented by their use of alternative fuels.

As alternative fuels have different energy densities, the CO2 emissions prevented would be calculated in terms of the energy consumed in comparison to liquid fuel oil. Alternative fuels that are eligible for the reward would be considered and specified by the Committee.

For example, ships burning ammonia would need 10,000 tonnes of ammonia during a calendar year to cut 13,786 tonnes of CO2 emissions. Based on a reward rate of e.g. about $100 per tonne of CO2 prevented, they would receive an annual reward of about $1.38 million for the total CO2 emissions prevented during a year. The actual amount for this annual reward would depend on the reward rate agreed upon by the IMO.

“With the ICS fund and reward proposal, IMO member states have a new but very short window of opportunity to put in place a global economic measure which can kick start the development and production of alternative fuels for shipping. To achieve net zero mid-century, these new fuels must start to become available in significant quantities on a commercial basis no later than about 2030,” ICS’s chairman Emanuele Grimaldi said.

The contributions made to the fund would be used to expedite the development and uptake of alternative fuels by rewarding ships burning alternative fuels, as well as bankrolling capacity building and negative impact mitigation in developing countries.

This would include the deployment of alternative maritime fuel production facilities and new bunkering infrastructure that may be required to expedite the transition, and funding for the IMO GHG-Trust Fund and IMO CARES, to support other maritime GHG reduction projects in developing countries, especially SIDS and LDCs.

A portion would also be distributed for applied research and development (R&D) programmes of alternative fuels and innovative technologies.

The proposal is being made as pressure on IMO to adopt more ambitious decarbonization targets mounts ahead of the adoption of a revised IMO GHG Strategy set to take place in 2023.

In 2018, IMO adopted an initial strategy for the reduction of GHG emissions from ships, which mandates a reduction in the carbon intensity of international shipping by at least 40% by 2030, pursuing efforts towards 70% by 2050, compared to 2008.

Industry bodies and certain member states have been urging the IMO to end ship climate emissions by 2050 in line with the 1.5-degree global emission commitments. Being a political body, it has been extremely difficult to find common ground among IMO members to support the net-zero commitment, especially for countries relying heavily on fossil fuels.

Coming ahead of COP 27, the industry proposal is also deemed relevant in the context of the total CO2 emissions from international shipping – regarded as a ‘hard to abate’ sector – which accounts for between 2 and 3 per cent of the world economy’s total greenhouse gas emissions. 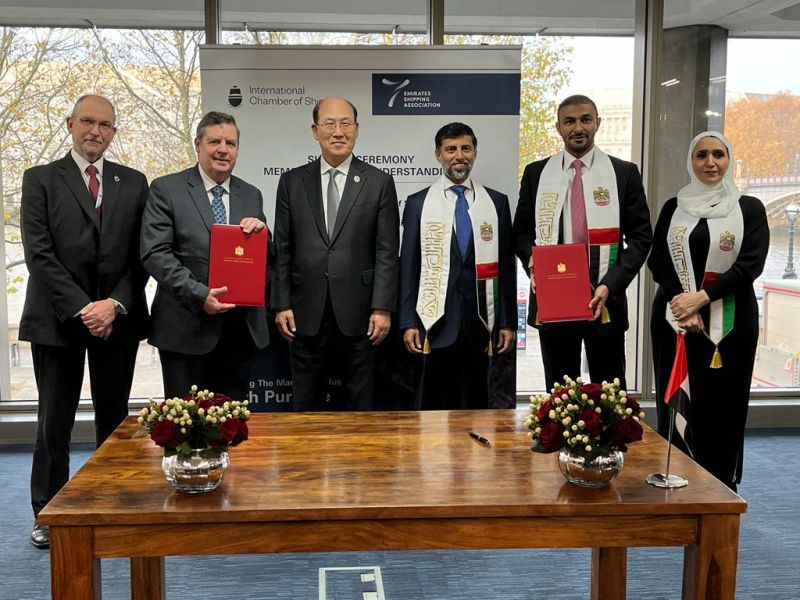