India’s state-run oil and gas companies ONGC and Oil India have launched a joint bid for a 20 pct share in Mozambique’s offshore Rovuma Area 1, previously offered for sale by Anadarko and Videocon, Reuters has reported, citing a source close to the matter.

The Economic Times on March 5, reported that Anadarko and Videocon were running a joint auction procedure, but added that the final transaction would be completed separately.

Sources say that the total value of the sale could reach a $4.5 billion figure.

India’s Videocon is looking to divest its 10% in order to reduce debt, while Anadarko, which operates the field with 36.5% is reportedly selling a 10% stake in order to attract a major partner which will help the company transform the gas discovered off Mozambique into LNG.

ExxonMobil and Shell are also believed to be interested in acquiring a stake in the area.

“Twenty percent is enough to attract the interest of majors like Shell and Exxon Mobil or even PetroChina,” Marne Beukes, an Africa energy analyst at IHS, a research concern in London, has been quoted as saying by various internet sources.

China’s CNPC which had also been reported interested, yesterday acquired a 20% stake in Area 4 offshore Mozambique, operated by Italy’s Eni for $4.21 billion.

To remind, Anadarko and Eni, in December 2012 reached Heads of Agreement (HOA) with Eni, establishing foundational principles for the coordinated development of the common natural gas reservoirs spanning both Mozambique’s Offshore Area 1 (operated by Anadarko) and Offshore Area 4 (operated by Eni).

The HOA is designed to facilitate a work program whereby the two operators will conduct separate, yet coordinated, offshore development activities, while jointly planning and constructing common onshore liquefaction facilities in the form of an LNG (liquefied natural gas) park in the Cabo Delgado Province of northern Mozambique.

Bloomberg on Wednesday reported that Anadarko was in talks with Japanese companies to supply LNG produced from its offshore Mozambique gas fields.

The news agency quoted Steve Hoyle, vice president of LNG marketing Anadarko, as saying: “We are advancing efforts with selective companies in Japan and we’re hopeful that the policy uncertainty around nuclear power and U.S. exports does not cause them to miss out. None of those things are going to be clarified anytime soon.”

Hoyle, at the Mozambique Gas Summit held on March 12-14 in Maputo, also added that the company was in talks with 20 companies from 10 countries.

The Anadarko-operated Offshore Area 1 covers approximately 2.6 million acres in the deepwater Rovuma Basin. Anadarko and its partners have drilled more than a dozen successful wells on the block (nine in the Prosperidade complex, six in the Golfinho/Atum complex). The Prosperidade complex holds an estimated 17 to 30+ Tcf of estimated recoverable resources.

In May 2012, Anadarko announced the Golfinho discovery well, almost 20 miles northwest of Prosperidade, had encountered another major natural gas accumulation. This well was followed by the Atum discovery in June 2012. This new complex, which is separate and distinct from Prosperidade and contained entirely within the Offshore Area 1, is estimated to hold between 15 and 35 Tcf of recoverable natural gas resources. 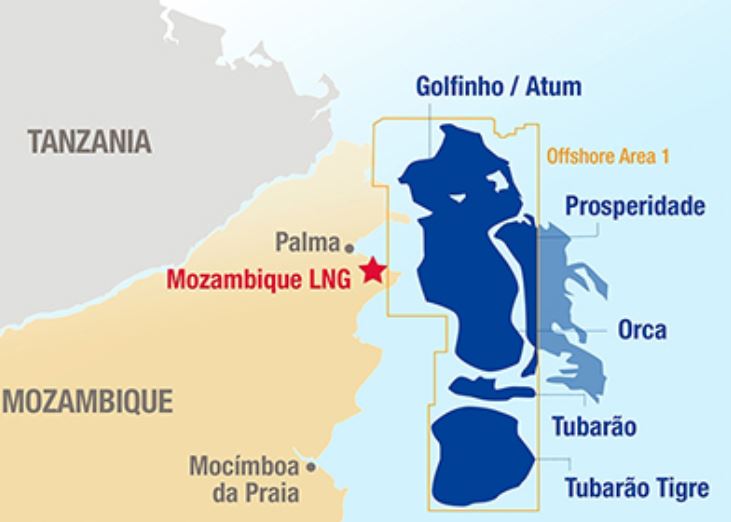