Oil Search reported that its profit after tax for the six months to 30 June was US$107.5 million, compared to US$114.5 million in the corresponding period of 2011.

Sales revenue increased by 7%, due to higher gas sales and rig income, underwritten by continued strong oil production and a healthy oil price, with the 6% fall in profitability largely reflecting an increase in expensed exploration costs.

Operating cash flow for the first six months was US$198.3 million, which was used to fund Oil Search’s active exploration and development drilling programme. PNG LNG Project expenditures were funded from cash and by drawdowns from the PNG LNG Project finance facility.

During the first half of the year, continued progress was made on the construction of the PNG LNG Project, operated by Esso Highlands Limited, an affiliate of ExxonMobil Corporation. Milestones included the installation of several of the key items of LNG train equipment, including the Train 1 main cryogenic heat exchanger, and the completion of the offshore pipeline. The US$15.7 billion Project remains on track for first LNG sales in 2014.

A key highlight for the period was the discovery of a substantial gas accumulation at P’nyang South. With resource evaluation and preliminary analysis of development options now underway, Oil Search believes the P’nyang field could provide a key underpinning volume for LNG expansion.

The Company has embarked on one of the largest drilling programmes in its long history, with the objective of finding oil and gas resources to underwrite further growth beyond the present two train PNG LNG development. P’nyang South was the first well in this programme, with two high potential wells currently being drilled. Trapia 1, an exploration well in the PNG Highlands, is targeting a gas structure east of the Hides and Angore gas fields, while Taza-1, located in the Kurdistan region of Iraq, is drilling a substantial oil prospect. Success in either well could have a significant impact on Oil Search’s value.

The exploration programme will continue over the balance of 2012 and into 2013, with Mananda 6 in the Highlands, the Gulf of Papua offshore programme and the Semda-1 well in Tunisia.

Oil Search’s balance sheet remains very solid. At the end of June 2012, the Company had a cash balance of US$852.7 million while US$2,349.2 million had been drawn down under the PNG LNG Project finance facility. The Company’s revolving credit facility, totalling US$217.5 million at the end of June, remained undrawn.

Significant progress has been made in refinancing the Company’s existing corporate debt facility, with strong support received from a range of domestic and international banks. Committed offers have been received for in excess of US$500 million and the facility is expected to be finalised shortly. The new facility will provide additional funding flexibility with a term beyond the commencement of cash flows from the PNG LNG Project.

The Board has approved the payment of an unfranked interim dividend for 2012 of two US cents per ordinary share, payable on or around 8 October 2012. The dividend payment will be funded by the Company’s fully underwritten Dividend Reinvestment Plan.

“Oil Search performed well in the first half of 2012, achieving a net profit after tax of US$107.5 million, which was only a little lower than in the corresponding period of 2011. Oil production remained strong in the first half, with a number of new wells and workovers contributing to the result, partially offset by a two week scheduled facilities shut-down for PNG LNG related work. Oil and gas sales were similar to first half 2011 levels, due to the timing of oil shipments. Global oil prices remained firm for most of the half year, with the Company realising an average price of US$115.48 per barrel, comparable to the corresponding period of 2011.

The Board has approved the payment of a 2012 interim dividend of two US cents per share, the same as the 2011 interim and final dividends. The Company’s shares will commence trading exdividend on 7 September 2012, the record date for the dividend is 13 September 2012 and payments will be made to shareholders on or around 8 October 2012. A fully underwritten Dividend Reinvestment Plan will fund this payment.”

“Construction activities at the many PNG LNG Project operating sites continued apace during the period. Some of the milestones achieved included the completion of the outer shells and roof installation for the two LNG tanks, installation of key vessels and equipment on the LNG trains and the completion of the 2.4-kilometre jetty trestle and the offshore pipeline lay. Pleasingly, the recent Government elections caused no significant disruptions to activities at any of the work fronts.

The Project’s construction activities have now reached their peak level, with a workforce in excess of 17,600 people. At the end of June 2012, more than 8,500 PNG citizens had received training for both construction and production roles across the Project and more than 1,300 local businesses had been supported through training and business development programmes. This leaves a strong legacy of skills and experience for use on future major developments, both in PNG and elsewhere.

While substantial construction activities still remain to be completed, the Project is presently on track to meet the revised budgeted capital cost of US$15.7 billion and continues to make good progress towards the 2014 delivery window.”

“Oil Search’s new drilling programme has had an excellent start, with the discovery of a major gas resource at the P’nyang South prospect. Work is presently underway on further defining the resource and analysing various development options. Based on data to date, Oil Search believes that P’nyang has the potential to be a key underpinning resource for LNG expansion, particularly in combination with the gas reserves upside in the Associated Gas fields.

The second well in the gas expansion programme, Trapia 1, is currently drilling. This is a higher risk, exploration play but the prospect lies close to the existing PNG LNG fields and infrastructure so, if successful, would be a very valuable source of gas. There are a number of additional structures on trend with Angore and Trapia, which provide independent follow-up.

In the offshore Gulf of Papua farm-down process, the data room has closed and bidding has concluded, with a range of competitive offers received. Discussions with preferred farm-in partners are at an advanced stage and a farm-down is expected to be concluded shortly. The Stena Clyde drillship is now scheduled to be on-site and start drilling in January 2013.” 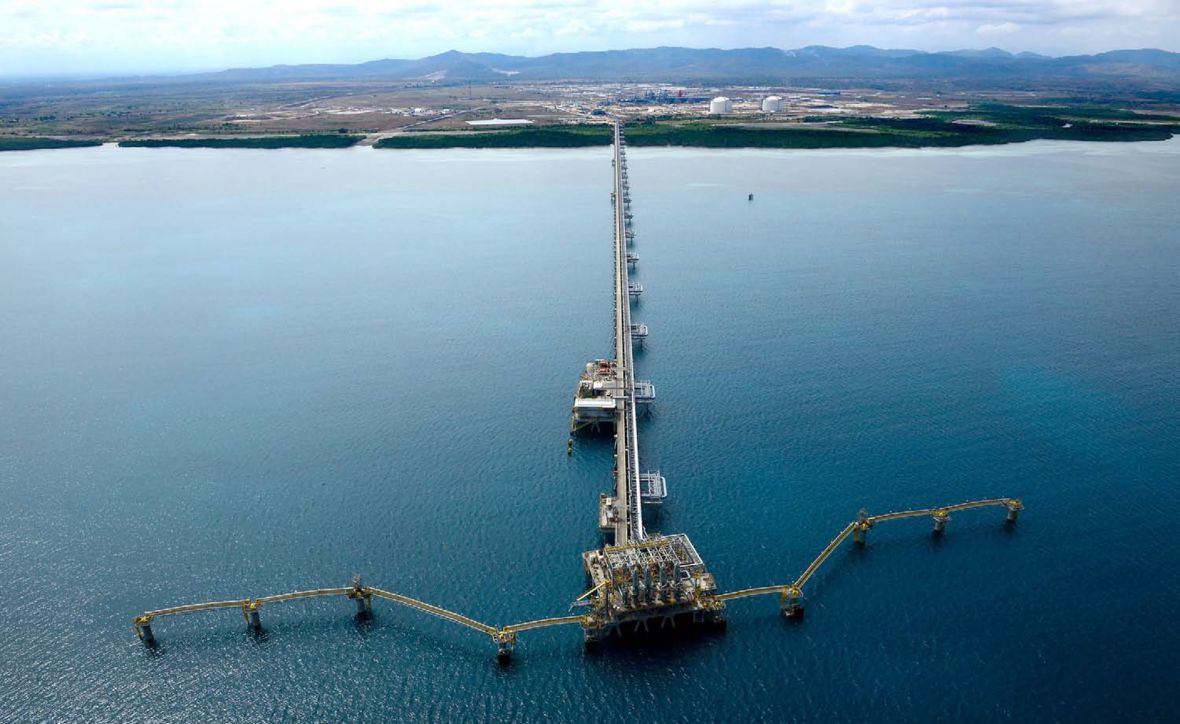