The report concludes the following key highlights in respect of Block CI-202:

• Development of Block CI-202 can be cost effective due to the close proximity of each of the existing discoveries and adjacent prospects which will allow tie-back to nearby facilities rather than each discovery requiring standalone development.

RPS notes that these are complex reservoirs and that in the context of the existing time frame and the available data, preparation of this report represents an initial estimate of resources. These estimates may be reviewed following current and planned technical work.

A drilling campaign is anticipated for 2011.

These resource estimates are consistent with Rialtos interpretation and support the future work programme under the PSC contemplated to properly evaluate the Block. C & L Natural Resources Limited (“C&L”) holds an 85% participating interest in the PSC, with the balance held by Petroci, the Cote D’Ivoire State owned oil company. Rialto owns a 75% shareholding in C&L, which provides an effective 63.75% working interest in Block CI-202.

CI-202 covers an area of 675 km2 and is located 30 km to the southeast of Abidjan, the primary commercial centre of Cote d’Ivoire, extending from the coastline to water depths of almost 1,000 meters.

CI-202 is located within the Ivorian Basin, which encompasses offshore eastern Cote d’Ivoire and offshore western Ghana. CI-202 contains four un-appraised discoveries (Figure 1) all of which are covered with good quality 3D seismic data and which are all interpreted as Stratigraphic traps.

To further define the resource potential and as part of its work obligations, C&L, with the technical support of Rialto, are undertaking detailed seismic reprocessing and inversion studies over the existing discoveries. C&L has engaged leading regional firms, Tricon Geophysics (seismic reprocessing) and Rock Solid Images (inversion), leveraging from the successes achieved from utilizing advanced seismic and inversion studies in Ghana.

These studies led to the unlocking of the stratigraphic play system along the margin resulting in the giant oil discoveries of Jubilee, Tweneboa and Odum. 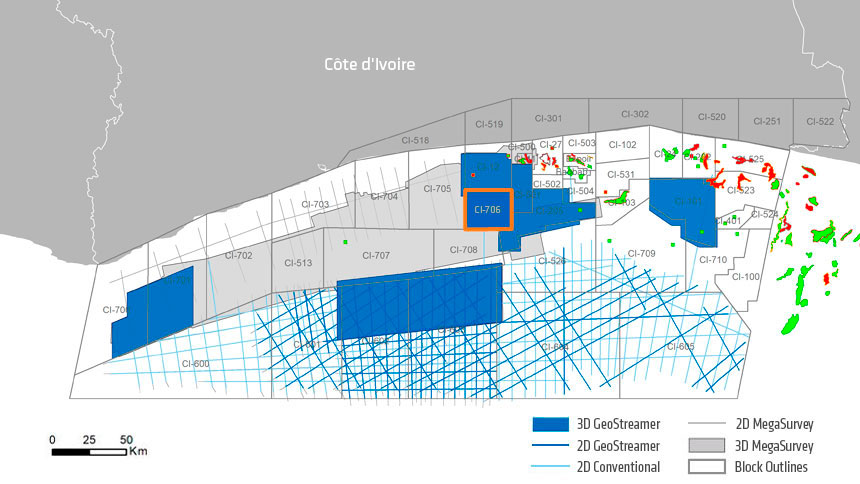