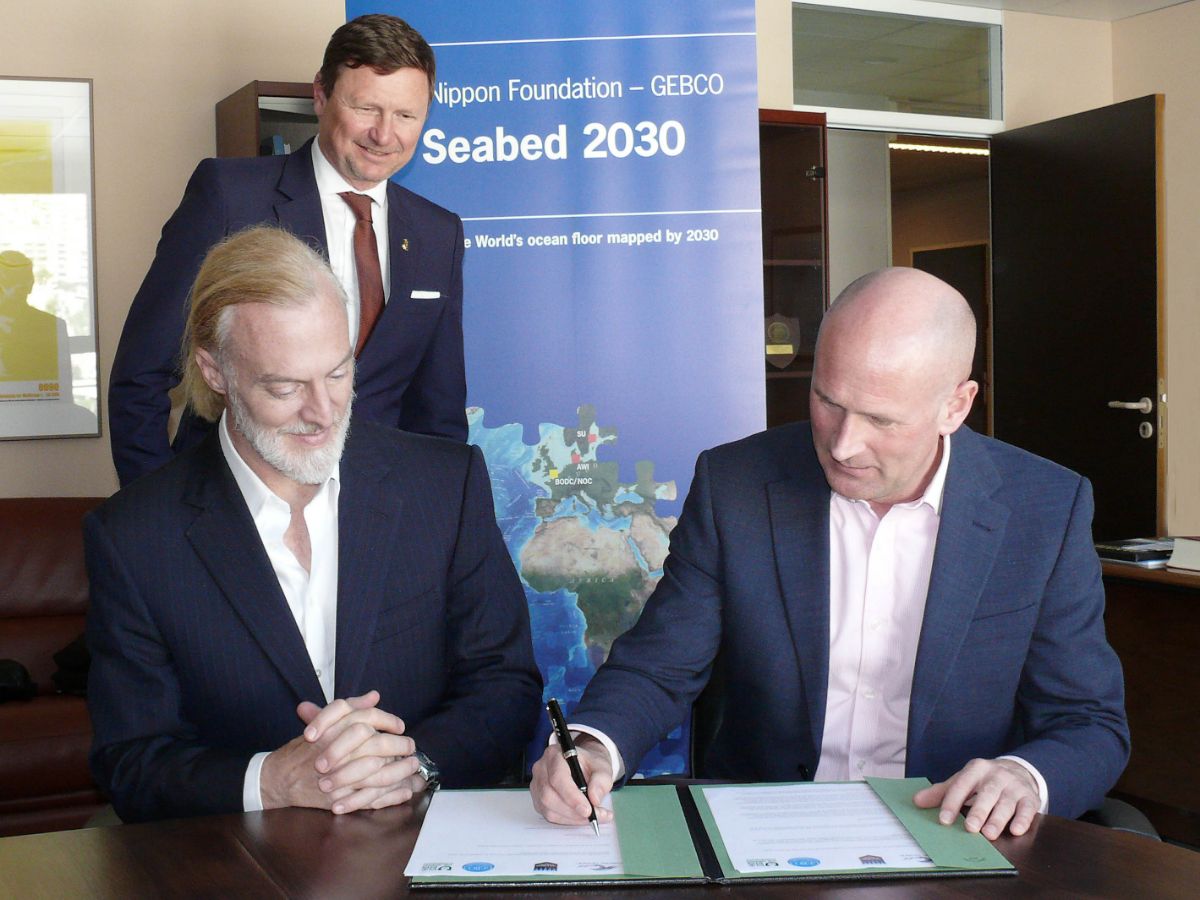 The Nippon Foundation-GEBCO Seabed 2030 Project and the Five Deeps Expedition have signed a Memorandum of Understanding (MoU) laying the groundwork for previously unexplored areas of the seafloor to be mapped and the resulting data made available for public use.

Signed at the headquarters of the International Hydrographic Organisation (IHO) in Monaco, the MoU establishes a partnership between Seabed 2030 and the Five Deeps Expedition in recognition that both parties are working to increase humanity’s collective scientific understanding of the world’s oceans.

Seabed 2030 is a collaborative project between The Nippon Foundation and GEBCO to inspire the complete mapping of the world’s ocean by 2030, and to compile all bathymetric data into the freely available GEBCO Ocean Map. GEBCO is a joint project of the IHO and the Intergovernmental Oceanographic Commission (IOC). Acting director Dr Graham Allen signed the MoU on behalf of Seabed 2030.

The MOU creates a number of pathways for the Five Deeps Expedition and Seabed 2030 to collaborate in order to source and share new maritime data for the benefit of science. In the first instance, the Five Deeps expedition must produce detailed bathymetric maps of each of the five trenches before each dive to ensure the safety of its operations. It has been agreed that all of this high-resolution data will be donated to Seabed 2030 for inclusion in the global map of the ocean floor.

In addition to data gathered at trench sites, the Five Deeps Expedition has agreed to leave its sonar systems switched on while in transit in order to provide additional bathymetric data collected between these areas. These contributions represent data that would not otherwise have been collected.

In return, Seabed 2030 has agreed to enlist experts to operate the on-board sonar systems to collect the transit data, at no cost to the Five Deeps Expedition.

“The task of producing a complete map of the world’s ocean floor by 2030 is an ambitious undertaking, and can only be achieved through unparalleled international collaboration,” said Dr Graham Allen, acting director of The Nippon Foundation-GEBCO Seabed 2030 Project. “This partnership with the Five Deeps Expedition highlights what can be accomplished when two pioneering organisations come together with a determination to improve our collective understanding of the oceans. I’m delighted to form this partnership with Victor at the IHO today, and am excited to see this new data incorporated into the global grid.”

Victor Vescovo added: “The original, primary mission of the Five Deeps Expedition was to perfect and illustrate the extraordinary capabilities of our deep-diving system which includes the Limiting Factor as well as its support ship, the DSSV Pressure Drop. However, it is an honor and joy to complement that mission by also significantly contributing to GEBCO’s Seabed project – especially for these extremely deep locations which otherwise may not have been mapped anytime soon or with the extreme detail our systems can provide.”

All data collected and shared with the Seabed 2030 Project will be included in the global grid – the most complete bathymetric dataset of the world’s ocean floor. By the year 2030, this grid will represent a complete map to coincide with the conclusion of the United Nations’ Decade of Ocean Science.

SCA inks MoU with ABS to bolster its environmental sustainability
Posted: 28 days ago
PPA signs MoU with Japan to work on renewable energy exports
Posted: 6 days ago
DeepOcean inks deal for potential use of autonomous vehicles for environmental studies
Posted: 2 months ago