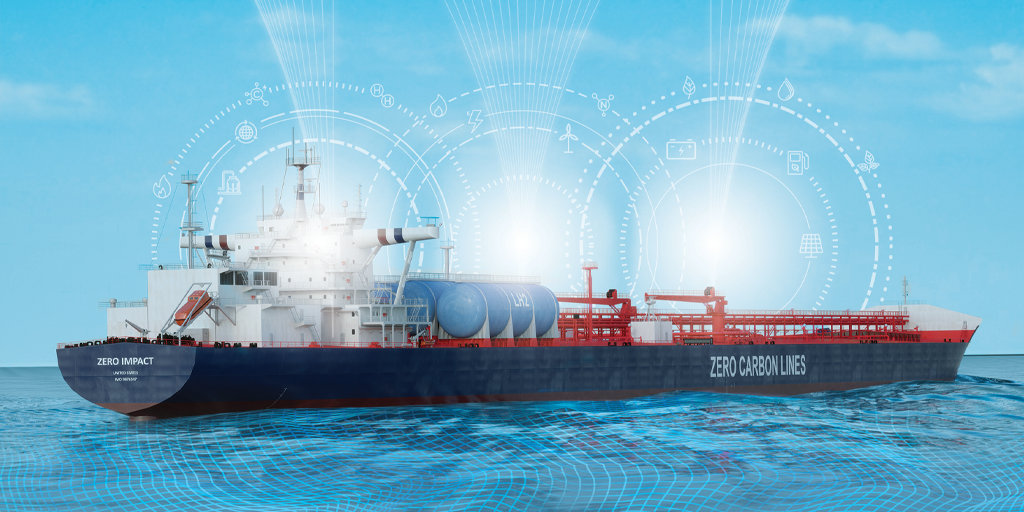 Three pathways to decarbonization of shipping

There are three potential fuel pathways toward developing zero-emission vessels and decarbonizing the future of shipping, according to ABS.

The US-based classification society just released the 2020 Setting the Course to Low-Carbon Shipping — Pathways to Sustainable Shipping outlook, which maps out the path toward decarbonization goals of the global fleet.

ABS says that owners and operators should choose their pathway based on two foundational criteria: the type of vessel and its operating profile in terms of trading route and cargo.

The study was carried out in cooperation with Maritime Strategies International (MSI) to create a global scenario for the future CO2 emissions from shipping,  and the outlook’s approach was supported by Maersk.

“Maritime’s decarbonization challenge can be regarded as a complex riddle with three elements: vessel energy-efficient technologies, operational optimization and low and zero-carbon or carbon-neutral fuels. All elements have a role to play, but we have identified that the rate of shipping’s transition to lower carbon fuels will have the single biggest impact on its global carbon footprint; more than any predictable shifts in commodity demand, enhancements to operating practices, vessel routings, or ship designs.,” said Christopher J. Wiernicki, ABS Chairman, President and Chief Executive Officer.

“The models in our research suggest our industry will meet the targets for the reduction in carbon intensity by 2050, but it might miss the target for the total GHG emitted annually. ”

LNG is a relatively mature low-carbon fuel, comprised primarily of methane. Its C/H ratio offers a reduction in carbon dioxide (CO2 ) emissions of up to 21 percent compared to baseline heavy fuel oils, the outlook reads.

The value does not include carbon release from methane slip, which may be an issue in two-stroke or four-stroke engines that operate on LNG in the Otto cycle.

Minimizing methane slip has been described as critical to the commercial adoption of these renewable fuels.

The industry is currently developing in-cylinder emissions control strategies, which could be combined with after-treatment systems. By minimizing methane slip, fuels such as bio-LNG and SNG/RNG can offer carbon-neutral propulsion.

These can be combined with methane oxidation catalysts and other after-treatment systems used to treat the exhaust gas to further reduce the methane emissions and minimize the carbon output of using LNG.

As a low-carbon fuel, LNG can be combined with new technologies and/or operational measures to meet the 2030 emissions-reduction goals, and it can contribute to further reductions in the future, if blended with bioLNG or SNG/RNG.

If the latter can be commercialized and made available at a large scale in the medium term, the carbon footprint from using LNG would be reduced in proportion to the amount of renewable fuel used in the blend. Given the carbon-neutral promise of bio-LNG and SNG/RNG, significant efforts are currently being made to explore these solutions for commercial use, ABS said in the outlook.

At the end of the light gas spectrum, hydrogen may be a solution for future zero-carbon marine vessels, because it offers the highest energy content per mass among all candidate fuels, high diffusivity, and high flame speed.

However, it also requires cryogenic storage and dedicated fuel supply systems for containment. Hydrogen as a fuel has been demonstrated in internal combustion engines, gas turbines, and fuel cells, all of which will play a role in marine power generation and propulsion systems.

THE HEAVY GAS AND ALCOHOL PATHWAY

This category includes fuels comprised of larger molecules than the light gas group. As such, they have higher C/H ratios — therefore, lower carbon-reduction potential — and lower energy content.

Their fuel storage and supply requirements are also less demanding. These fuels include LPG, methanol, ethanol, and ammonia.

When used as the primary fuel, methanol can reduce CO2 emissions by around 10 percent. However, methanol has the potential to be a carbon-neutral fuel in the future, if it is produced renewably as biomethanol or electro-methanol.

The lower energy content of some of these fuels (e.g. methanol) limits the amount of fuel energy that can be stored on board a ship; thus, they only may be suited to the types of vessels, trades and routes that allow for frequent refueling.

LPG has higher energy content than the alcohols and may be more conducive to use in modern dual-fuel engines, but it has not been as widely adopted as LNG due to its lower potential to lower emissions, and its different safety challenges.

Nevertheless, methanol and LPG are currently thought of as mature fuels by engine manufacturers, which have marketed engine platforms able to use them. Therefore, they can be used to meet the carbon-reduction goals of 2030 and can pave the way to carbon-neutral propulsion, if they are produced renewably in the future.

At the end of the heavy gas or alcohol spectrum, lies ammonia, which can be a zero-carbon fuel if produced renewably.

Despite its toxicity and more stringent handling requirements, ammonia engines are in the design process. Recently, designs for ammonia-fueled feeder ships also have been unveiled by consortia that variously include designers, class, and shipyards.

For ammonia to become a commercially viable long-term fuel option, comprehensive supply-side infrastructure would need to be built and new, stringent safety regulations designed and implemented, the outlook further reads.

This category includes fuels that are produced from biomass, including plants, waste oils, and agricultural waste.

Catalytic processing and upgrading of biomass can yield liquid fuels with physical and chemical properties comparable to diesel oil; this is desirable from a design standpoint because they can be used as drop-in biofuels with minimal or no changes to marine engines and their fuel delivery systems.

Currently, the most widely used component is fatty acid methyl esters (FAME) or biodiesel, which is described in the latest ISO (8217/2017) specifications for marine fuel blends and is being offered by major oil companies.

The standard allows for seven percent biodiesel in the fuel blend, but some shipowners are testing richer blends, from 20 to 100 percent. FAME is a first-generation biofuel and faces challenges associated with its poor oxidative stability, and its potential to degrade over time.

Hydro-treated vegetable oil (HVO) is a second-generation biofuel, which is not produced from food crops. It is often referred to as renewable diesel and produced using modern hydro-treating processes, which yield high-quality fuels with better stability than FAME biodiesel.

HVO has similar physical and chemical properties to marine gas oil (MGO), making it fully compatible with existing engines and fuel-delivery systems. Renewable diesel also can be produced from biomass gasification, using the Fischer-Tropsch (FT) process. It is often referred to as a gas-to-liquid or biomass-to-liquid fuel.

Renewable diesel fuel is thought to be a promising medium- to long-term solution for shipowners, because it can offer a significant reduction in carbon output with minimal capital expenditures.

Electro-fuels: Using renewable energy to produce electro-fuels from biomass could reduce the energy required for their production, and thus reduce their life-cycle carbon footprint. This technique can be applied to any of the three fuel pathways to produce bio-LNG, bio-methanol or renewable diesel.

Electro-fuels have the potential to offer carbon-neutral propulsion and can provide solutions in the medium- to long-term.

In addition to fossil and biomass sources, electro-fuels can be produced by carbon dioxide recovery (CDR), a technique that converts CO2 to syngas, which in turn can be used to produce bio-LNG or bio-methanol.

The decarbonization mission of the shipping industry will bring numerous changes to the sector, including in ship design, safety, and environmental regulations as well as trade patterns and cargo volumes.

ABS said that low- and zero-carbon fuels that have low volumetric energy content, such as methanol, ammonia or hydrogen, may require holistic redesigns of vessels to be used as primary fuels.

Fuels with low energy content will require larger tanks for storage and their location on board will be a critical design factor. Novel power generation systems such as fuel cells may also change the architecture of the current engine room. They may enable more efficient use of space as they allow distributed placement.

Petroleum-based fuels are expected to have a considerable market share by 2050 (up to 40 percent), which makes the use of carbon capture and sequestration systems relevant not only for shore applications, but potentially on board marine vessels.

The transition to low- and zero-carbon fuels is likely to increase the cost of vessels and their operation in the medium term until the associated technologies for fuel production, distribution, bunkering and onboard use become more cost-effective.

“Based on the projected fuel mix for the five vessel segments analyzed in this study, shipping can meet the IMO’s target to reduce CO2 emissions per transport work (gCO2 /dwt/nm) by 70 percent by 2050, relative to 2008. However, to achieve a 50 percent reduction in absolute CO2 emissions (ton), the market share of petroleum fuels will need to be further reduced by 2050 (below 40 percent),” ABS concludes.

The in-depth elaboration of the conclusions presented in this article can be found in the ABS’ outlook here.