At the end of October 2014 the first of in total 78 Siemens SWT-4.0-130 turbines was installed at the 312MW Borkum Riffgrund 1 offshore wind farm, located 54km off the German coast and around 37km from the island Borkum. In December Danish CT Offshore completed the installation and burial of the 44 inter-array cables that connect the turbines, using their VOS SYMPATHY
vessel and survey vessel MV SANDER 2.

Borkum Riffgrund 1 is expected to be fully operational in the first half of this year, providing electricity for around 320,000 households. It is a project by DONG Energy (50%), KIRKBI Invest A/S and William Demant Holding A/S (together 50%).

In December DONG Energy also revealed that it had acquired a 100% ownership interest in the Borkum Riffgrund West 2 offshore wind farm that will be located adjacent to Borkum Riffgrund 1 from Energiekontor AG.

The 288MW DanTysk offshore wind farm, located 70km west of the island of Sylt, directly on the German-Danish border, has produced its first electricity to be fed into the German electricity network early in December 2014. The wind farm comprise of 80 Siemens 3.6MW turbines.

Commissioning of the remaining turbines continues. Full production is expected to be available for the grid by Q2 2015. When fully commissioned DanTysk will be able to provide up to 400,000 homes with green energy annually.

Due to the large distance from shore a 35m x 35m residential platform for up to 50 persons is being installed in the wind farm, close to the transformer station. The platform is expected to be ready this spring. DanTysk is a project by Vattenfall (51%) and Stadtwerke München (49%).

With the last of the 41 jacket foundations for the 288MW EnBW Baltic 2 offshore wind farm loaded out just before this edition went to press the foundation installation phase will have been completed by the time you are reading this.

The jacket foundations were produced by Danish steel manufacturer Bladt Industries. The company had built an entire new production site at Undo Industrial Park to be able to manufacture this size of foundation in series. It took some 8 months to produce all 41 foundations.

In total 80 Siemens 3.6MW turbines will be installed at the German wind farm, located around 32km north of Ruegen Island in the German Baltic Sea but due to variations in soil conditions and water depths it was decided to opt for a combination of 41 jackets and 39 monopile foundations.

The monopile Installation was already completed in November, and was followed a few weeks later by the offshore substation.

Also in progress is the construction of an OSM station on the site of the Kraftwerks Rostock. This already functioned as the site for the arrival of the approximately 3,000m long and 110t heavy replacement export cable that arrived mid January.

When fully commissioned these turbines will be able to produce enough electricity to power around 340,000 households.

Helgoland in the German North Sea is now fully operational. WindMW GmbH, a joint-venture between Blackstone Group and Windland Energieerzeugungs GmbH, inaugurated their project at an official ceremony in Bremerhaven in November last year.

Meerwind was the first German offshore wind project to be fully financed by private investors and the first to close under Germany’s KfW financing programme. Construction of Meerwind began in 2012 and was completed on schedule within 18 months, with the last turbine installed in April last year.

RWE Innogy’s 295MW Nordsee Ost wind farm, located approximately 30km north of the island of Heligoland, reached a milestone at the end of 2014 when the last of 48 Senvion 6MW wind turbines was successfully installed over Christmas.

The installation of the turbines took 7 months with 2 installation vessels, Victoria Mathias and Friedrich Ernestine, working at the same time. The Eurogate Container Terminal in Bremerhaven was used as the base port from which these 2 vessels operated.

Commissioning of the turbines is already in full progress with the first turbine feeding electricity to the national grid, via the Helwin alpha offshore converter platform, since the second half of December. Full commissioning is expected for this spring. The wind farm will then be able to supply green energy to around 320,000 households annually. 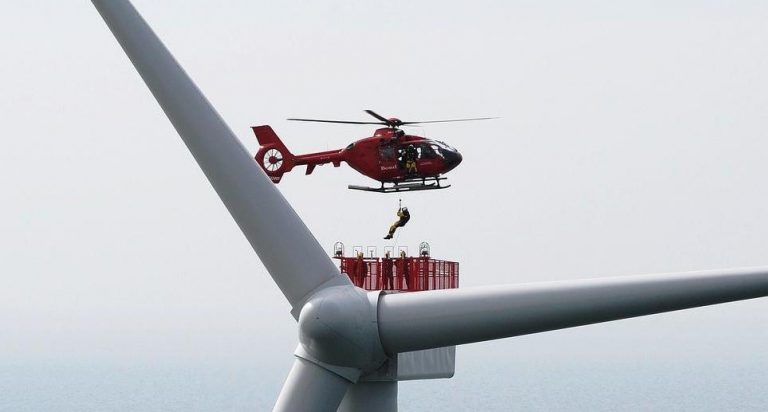