Abu Dhabi launches first ever oil and gas licensing round 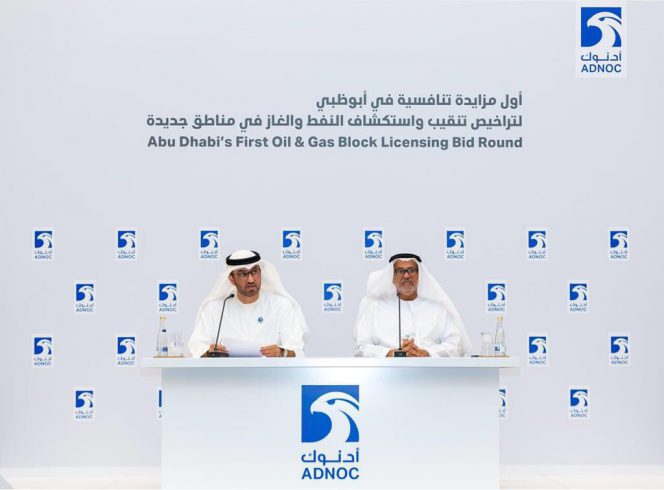 As part of Abu Dhabi’s first ever block licensing strategy and on behalf of the Supreme Petroleum Council (SPC), the Abu Dhabi National Oil Company (ADNOC) on Tuesday launched the details of the initial round of six geographical oil and gas blocks open for bidding. Two of these blocks are offshore and four are onshore.

This follows the announcement last month by Dr Sultan Ahmed Al Jaber, UAE Minister of State and ADNOC Group CEO that Abu Dhabi was to launch its first ever competitive exploration and production bid round.

ADNOC said that the licensing strategy represents a major advance in how Abu Dhabi unlocks new opportunities and maximizes value from its hydrocarbon resources. It is also consistent with the company’s approach to expanding its strategic partnerships across all areas of its business. The successful bidders will enter into agreements granting exploration rights and, provided defined targets are achieved in the exploration phase, be granted the opportunity to develop and produce any discoveries with ADNOC, under terms that will be set out in the bidding package.

Dr Al Jaber said: “The launch of these large new licensing blocks is an important step for Abu Dhabi and ADNOC as we develop and apply new strategies to realize the full potential of our resources, maximize value through competitive bidding and accelerate the exploration and development of new commercial opportunities.

“This approach is central to our expanded partnership strategy, which aims to introduce new opportunities as we broaden and diversify our partnership base. In addition, as we begin to expand our downstream portfolio, the new licensing blocks reinforce our long term production growth ambitions and builds on our successful legacy as a leading upstream player. This is a rare and exciting opportunity, for both existing and new partners, in a secure and stable investment environment.”

The UAE is the world’s seventh largest oil producer, with about 96% of its reserves within the emirate of Abu Dhabi. Located in one of the world’s largest hydrocarbon super-basins, there remains undiscovered and undeveloped potential in the numerous stacked reservoirs.

Some of the blocks already have discoveries, and within the combined area there are 310 targeted reservoirs from 110 prospects and leads. In addition to the country’s conventional oil and gas accumulations, some of the offered blocks also contain significant unconventional resource potential. 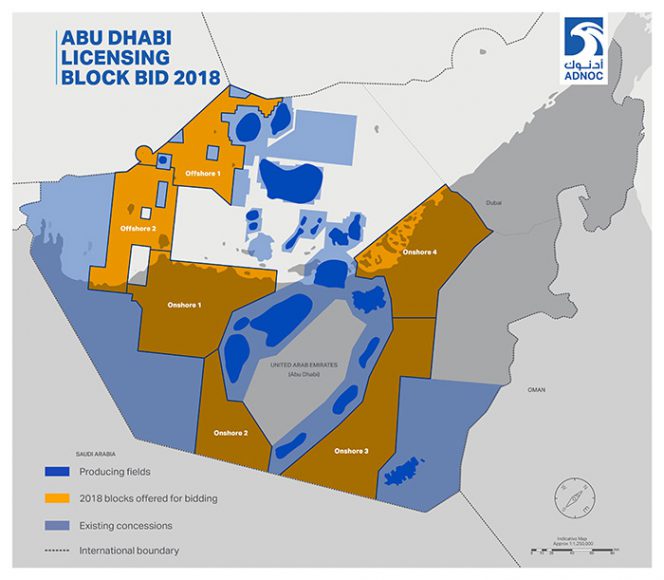 The six blocks open for bidding, two of which are offshore and four are onshore, cover an area of between 2,500 and 6,300 square kilometers, which, by comparison, is up to three quarters of a U.K. North Sea quadrant, consisting of 30 blocks. In total, Abu Dhabi’s six blocks comprise an area of almost 30,000 km2.

ADNOC noted that registration is open to companies with suitable expertise and technology that can contribute to accelerating the exploration and development of new conventional and unconventional hydrocarbon opportunities in Abu Dhabi.

The closing date for the receipt of bids will be in October, after which ADNOC will evaluate the bids, using the criteria set out in the bidding instructions, and the SPC will award the successful bidders. The first bid round is planned to conclude this year.