Anadarko targets first half of 2019 for Mozambique LNG FID

Anadarko Petroleum expects to make a Final Investment Decision (FID) for its Mozambique LNG project in the first half of 2019.

The approval from the government of Mozambique for the Golfinho/Atum field development plan was received in March 2018.

Following the approval, during the second quarter of this year, Anadarko and its Area 1 co-venturers signed a Heads of Agreement with Tokyo Gas and Centrica for long-term LNG off-take of 2.6 MTPA.

In its report for the second quarter of 2018 releases on Tuesday, Anadarko said that it achieved significant advancements on the Mozambique LNG project, including new heads of agreements and expected cost reductions, with an anticipated Final Investment Decision (FID) during the first half of 2019.

Al Walker, Anadarko Chairman, President and CEO, said: “Our Mozambique LNG project has made excellent progress, and we expect a Final Investment Decision in the first half of 2019.”

Additionally, the company and its contractors expect to realize substantial cost savings, with Anadarko now expecting to deliver the first two onshore liquefaction trains with 12.88 million tonnes per annum (MTPA) capacity for less than $600 per tonne.

Aandarko also said that recommendations for award of the offshore contractor and equipment providers are progressing through internal, co-venturer and Government of Mozambique approval.

Activities at the Afungi onshore site, including resettlement, continue to ramp up as Anadarko positions the onshore area for construction. Subsequent to quarter end, Area 4 joined the Anadarko-led Resettlement project as a 50% participant. 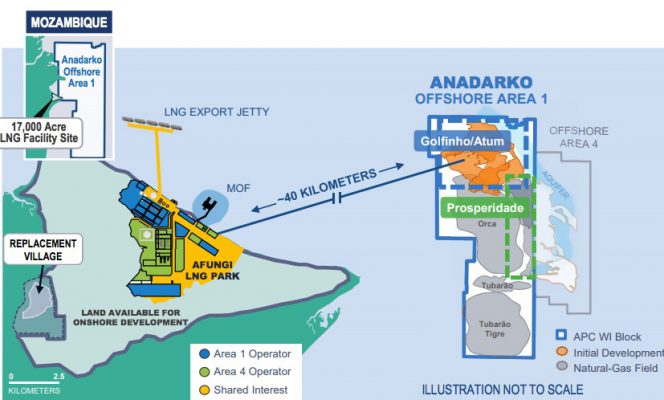