Azinam takes over South African license ahead of exploration well

Africa Energy has signed farmout agreements with Azinam and Panoro Energy for Block 2B located offshore South Africa. Under the deal, Azinam will become the operator of the block.

Africa Energy on Tuesday announced the execution of two farmout agreements whereby the company will transfer an aggregate 62.5% participating interest in the Exploration Right for Block 2B offshore South Africa in consideration for a carry through the next exploration well, Gazania-1, which is expected to spud by the end of 2020.

Africa Energy will retain a 27.5% participating interest in Block 2B.

Garrett Soden, Africa Energy’s President and CEO, commented, “We are excited to farmout part of our interest in Block 2B and add a carried well to our very active and potentially transformational 2020 drilling program. Block 2B has the A-J1 oil discovery from 1988 in shallow water close to shore with significant contingent and prospective resources. The Gazania-1 well will target a relatively low-risk rift basin oil play up-dip from the discovery.”

In consideration for the assignment of this interest, Azinam will pay Africa Energy $0.5 million at close and a disproportionate amount of the Gazania-1 exploration well and other joint venture costs. Azinam paid a $1.5 million deposit to Africa Energy at signature of the Azinam farmout agreement and will place an additional amount into escrow at close to support its obligations under the Azinam farmout agreement.

Daniel McKeown, Managing Director of Azinam, commented: “With this transaction, Azinam is positioned to deliver the first major oil production offshore South Africa. With A-J1 having flowed oil to surface and with the benefit of a significant database of well and seismic information, Azinam believes that Block 2B has the potential to provide South Africa with its first major offshore oil production. This transaction will allow for a well to be drilled to test the wider potential of the A-J1 discovery. Azinam and partners are targeting 349 million barrels of oil (Best Estimate of Prospective Resources).”

In consideration for the assignment of this interest, Panoro will pay a disproportionate amount of the Gazania-1 exploration well costs.

John Hamilton, CEO of Panoro, said: “This farm-in to Block 2B is in line with Panoro’s renewed strategy of acquiring minority high-impact exploration interests close to existing discoveries and with clear routes to commercialisation. We are particularly excited to work together with Africa Energy Corp, which has played an important role in opening up the offshore oil and gas potential in South Africa. Exploration activity across Southern Africa is gearing up for a very busy period, and we look forward to drilling the identified prospects on this acreage.”

Block 2B is located in the Orange Basin and covers 3,604 square kilometers off the west coast of South Africa 300 kilometers north of Cape Town with water depths ranging from 50 to 200 meters. Oil was discovered and tested by Soekor in the A-J1 borehole drilled in 1988. Thick reservoir sandstones were intersected between 2,985 meters and 3,350 meters. The well was tested and flowed 191 barrels of oil per day of 36 degree API oil from a 10 meter sandstone interval at about 3,250 meters. Significant prospectivity has been identified over the entire A-J graben area using 686 square kilometers of 3D seismic data from 2013. 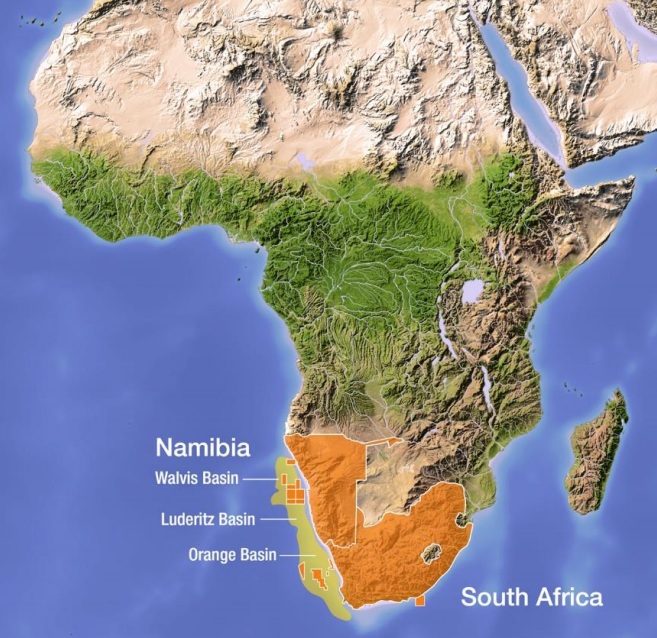