UK North Sea oil and gas company Decipher Energy has this week produced first oil from the Orlando field via the Ninian offshore platform, some thirty years after the original discovery was made by Chevron in 1988/89.

Orlando field oil will be transported from the CNRI-operated Ninian Central Platform through the Ninian Pipeline System to the Sullom Voe Terminal for processing and offtake.

To remind, Atlantic Petroleum and the former operator Iona Petroleum back in 2013 sanctioned the Orlando development, with plans to develop the field as a subsea tie back to the Ninian Central Platform in the Northern North Sea.

Under the original plan, the field had been expected to go online in 2014. This, however, did not happen as Iona eventually said the financing for the field had fallen through and that the company entered administration.

The company kept the development plan initially proposed by Iona, consisting of the subsea tie-back of a single horizontal production well, geosteered within the Tarbert Formation of the Brent Group, to the CNRI operated Ninian Central Platform, 11 kilometers to the southwest. The field is expected to produce at a plateau rate of 10,500 bopd with base case reserves of 8 MMboe.

In a statement this week, Decipher said it had in June 2018 successfully drilled and completed the Orlando development well 3/3b-13Y using the Ocean Guardian drilling rig..

“The well was drilled to a Total Depth of 18,266ft with a fully oil bearing horizontal pay interval of 3,946ft completed within the Tarbert Formation of the Brent Group. The results of the well were better than predicted with good porosity and excellent oil saturation. During the clean-up flow the well was confirmed as being able to deliver the anticipated peak production rates of over 10,000 bopd,” Decipher said.

Commenting on the first oil Decipher CEO Steve Bowyer said: “Successfully drilling the Orlando well within 12 months of acquiring Iona and delivering Orlando first oil within two years of completing the Iona acquisition is a great achievement and demonstrates what can be delivered when key stakeholders and the wider supply chain align on a clear plan.

“We are delighted to have exceeded our anticipated subsurface outcome from the well and are pleased to report that following the implementation of a robust HSE assurance programme our offshore operations have been completed without any significant incidents. The performance and collaboration of our key supply chain partners and the strong relationships developed will be key in delivering our future projects. In parallel with maturing our existing portfolio, we are targeting the acquisition of further high-value development opportunities and are in a strong position to execute our growth plans as a result of strong investor support“.

Decipher has also said it is maturing the potential high-value Senna and Mansell discoveries in the Northern North Sea, 11 kilometers away from each other, which could see a creation of a production hub.

“New 3D broadband seismic was acquired over these Licences during 2018, with the improved data quality an important factor in unlocking the joint Senna/Mansell development potential. These opportunities will be progressed towards an investment decision in 2019. We carry estimated contingent recoverable resources of up to 70 MMboe for a joint development. The Senna structure has a STOIIP estimate of over 160 MMbbls. The Mansell Licence, previously known as the Staffa field is anticipated to deliver a further 8 MMboe of recoverable resources,” Decipher said.

Decipher Subsurface Director Ross Cameron commented: “The new 3D broadband seismic acquisition was carried out efficiently by CGG and the ongoing processing of this high quality data set will allow us to mature these opportunities to determine their full resource potential and the optimum development solution. We look forward to receiving the processed data over the coming months, developing our subsurface understanding and determining the optimum development solution.” 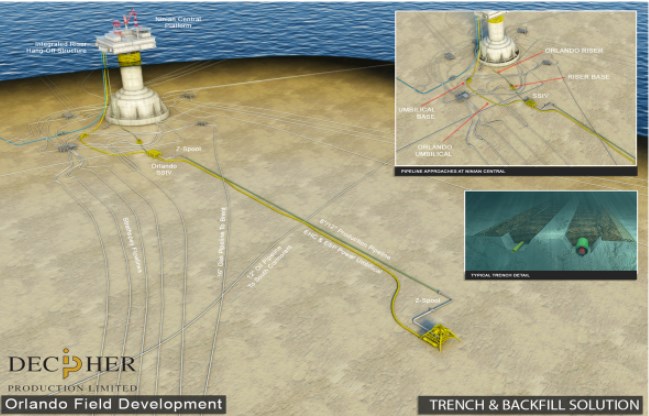 Decipher Energy’s Orlando field producing at half of capacity
Posted: 11 months ago
OKEA takes interest in Equinor’s Aurora discovery
Posted: about 1 month ago
Karoon CEO to retire after 16 years at the helm
Posted: 15 days ago
Advertisement
Related vacancies