Advertisement
Back to overview
Home Clean fuel DNV GL: Diversification of Fuels for Shipping After LNG

DNV GL: Diversification of Fuels for Shipping After LNG

The main drivers for the use of alternative fuels are the desire to reduce greenhouse gas emissions and the need to meet upcoming air pollution requirements. “The global merchant fleet currently consumes around 330 million tonnes of fuel annually, 80-85 per cent of which is residual fuel with high sulphur content,” says Christos Chryssakis, senior researcher DNV GL and position paper project manager. “Shipping must change, and we must contribute technical measures, operational measures and alternative fuels to meet the environmental challenges we are tackling.”

Over the next four decades, it is likely that the energy mix will be characterised by a high degree of diversification, says Chryssakis. “LNG has the potential to become the fuel of choice for all shipping segments provided the infrastructure is in place, while liquid biofuels could gradually also replace oil-based fuels.” Electricity from the grid is most likely to be used more and more to charge batteries for ship operations in ports and will also be used for propulsion. Other energy storage technologies that can find application in shipping in the future include flywheels, supercapacitors and thermal energy storage devices.

“Electrification has generated strong interest, particularly for ship types with frequent load variations. Significant growth in hybrid ships, such as harbour tugs, offshore service vessels, and ferries should be expected after 2020, and further applications for the technology may be applied to power cranes for bulk carriers or even in ports. After 2030, improvements in energy storage technology will enable some degree of hybridization for most ships.” For large, deep sea vessels, a hybrid architecture will be used for powering auxiliary systems, manoeuvring and port operations.

Renewable electricity could also be used to produce hydrogen, which in turn can be used to power fuel cells to provide auxiliary or propulsion power. Hydrogen is the smallest and lightest of all gas molecules and offers the best energy-to-weight storage ratio of all fuels. However, hydrogen as fuel can be difficult and costly to produce, transport, and store. Compressed hydrogen has a very low energy density by volume requiring six to seven times more space than heavy fuel oil. Liquid hydrogen on the other hand, requires cryogenic storage at very low temperatures (-253oC or 20K), associated with large energy losses, and very well insulated fuel tanks.
“Significant improvements in technology, accompanied by cost reductions are required if fuel cells are to become competitive for ships,” says Mr Chryssakis. “This includes reductions in size and weight and the need to improve responsiveness at transient loads.”

In the long term, short sea shipping is expected to take advantage of locally produced fuels such as biogas, biodiesel and methanol. Biofuels are flexible: they can be mixed with conventional fossil fuels to power conventional internal combustion engines, while biogas produced from waste can be used to replace LNG. A number of liquid fuels can be used in dual fuel engines as substitute for oil. Typically, a small quantity of marine fuel oil is used as pilot fuel to initiate the ignition process, followed by combustion of the selected alternative fuel. Some of the fuels that can be used are liquefied petroleum gas (LPG –a mixture of propane and butane), methanol, ethanol, and di-methyl ether (DME). Most of these fuels offer significant reductions of NOx and particulate matter emissions and are sulphur free and can be used for compliance with ECAs regulations.

In July 2013 DNV released rules for using low flashpoint liquid (LFL) fuels, such as methanol, as bunker fuel. Methanol has a relatively low flashpoint, is toxic when it comes into contact with the skin or when inhaled or ingested and its vapour is denser than air. As a result of these properties, additional safety barriers are required. The new mandatory notation LFL FUELLED covers aspects such as materials, arrangement, fire safety, electrical systems, control and monitoring, machinery components and some ship segment specific considerations.

Deep sea shipping needs globally available fuels and so will tend towards LNG and biodiesel. LNG uptake is expected to grow fast in the next five to 10 years, first on relatively small ships operating in areas with developed gas bunkering infrastructure where LNG prices are competitive to HFO prices. They will then be followed by larger ocean-going vessels when bunkering infrastructure becomes available around the world.

Experimentation with biofuels has already started on large vessels, and preliminary results are encouraging. However, advances in the development of biofuels derived from waste or algae will depend on the price of oil and gas. As a result, biofuels will have only limited penetration in the marine fuels market in the next decade. Still by 2030, biofuels are set to play a larger role, provided that significant quantities can be produced sustainably and at an attractive price.

Taking a Well to Propeller View

“When considering the overall impact of a given fuel on the environment, it is important to take into account not only the direct emissions from using the fuel on board a vessel, but also emissions related to the fuel’s production and transport pathway,” says Mr Chryssakis. “In addition, other effects, such as land and water usage can become important for certain types of fuels, especially for biofuels. An evaluation of well to propeller greenhouse emissions, rather than just shipboard potential to reduce emissions, demonstrates some major drawbacks for some of the options as does an evaluation of potential availability. For example the availability of land to grow biofuels is a significant barrier to its widespread use with an area the size of Greece required to produce 50 Mt of biodiesel.”

To be able to comment on the sustainability of fuels, quantitative data are required to put things in perspective, he says. This can be done by performing life cycle assessments (LCA) of marine fuels which allow for the comparison between different fuel pathways along the energy value chain. The results of an LCA can be used to assess the environmental footprint of each fuel. These types of assessments are complex and the chosen scenarios highly influence the outcomes. Whiles LCAs of alternative fuels for the automotive sector have been performed for a long time now, LCAs of alternative fuels for the maritime transport sector are relatively new.

“While renewable energy, particularly solar and wind, might perform favourably in an LCA, they are not seen as a viable large-scale alternative for commercial shipping,” says Mr Chryssakis. “Certainly vessels equipped with sails, wind kites or solar panels may be able to supplement existing power generating systems, but the relative unreliability of these energy sources make them ill-suited for deep sea transport or operations in some latitudes with seasonal weather conditions.”

Partnering for the Challenges Ahead

Besides IMO rules and ISO standards, development of appropriate rules and recommended practices is necessary for the safe implementation of any of these technologies in the future. “There is no doubt that adopting new technologies is likely to be an uncomfortable position for shipowners. DNV GL is leading the way through our technology qualification processes which are designed to ensure that new technologies work as expected,” says Mr Chryssakis. 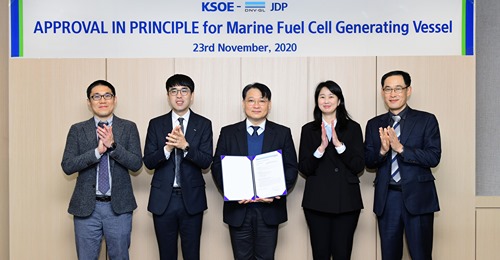