The European Commission has granted the revised technical layout for the “Kriegers Flak – Combined Grid Solution” interconnection, planned by two transmission system operators, Energinet.dk from Denmark and 50Hertz from Germany. The project will receive funding of up to EUR 150 million from the European Energy Programme for Recovery (EEPR).

The new interconnection is planned between the Danish region of Zealand and German Mecklenburg-Western Pomerania. It will have a capacity of 400MW. Operation is planned to start by the end of 2018.

“The new interconnection will contribute to guaranteeing the same high level of security of supply for consumers in Eastern Denmark going forward. It will allow producers and consumers to buy and sell more power across the borders. This adds more value to renewable energy and the green transition,” says Peder Østermark Andreasen, President and Chief Executive Officer of Energinet.dk.

“The approval by the European Commission is an acknowledgement to our work in integrating renewable energy sources with innovative approaches while strengthening the European electricity market. It shows that cooperation between the European transmission system operators is the right answer to the challenges of the energy transition. With the Combined Grid Solution we create the nucleus for an offshore grid in the Baltic Sea, a milestone in the development of European grids,” says Boris Schucht, Chief Executive Officer of 50Hertz.

As eastern Denmark and Germany are two different synchronous areas, a frequency transformation is necessary. This will be done by two voltage source converters (VSC) that convert the alternating current (AC) from the Nordic synchronous area into direct current (DC) and directly back to AC, now adapted to the European synchronous area. The converters will be installed in Bentwisch near Rostock, Germany. Placing the converters onshore is more cost-efficient and allows easier maintenance compared to running the converters on a separate offshore platform as it was foreseen in the original concept, Energinet.dk said in a press release.

The Kriegers Flak – Combined Grid Solution holds the status of a “project of common interest” (PCI), given by the European Commission. Projects of this status are grid expansion projects of significant importance, as they will bridge gaps in the infrastructure of the European power system. 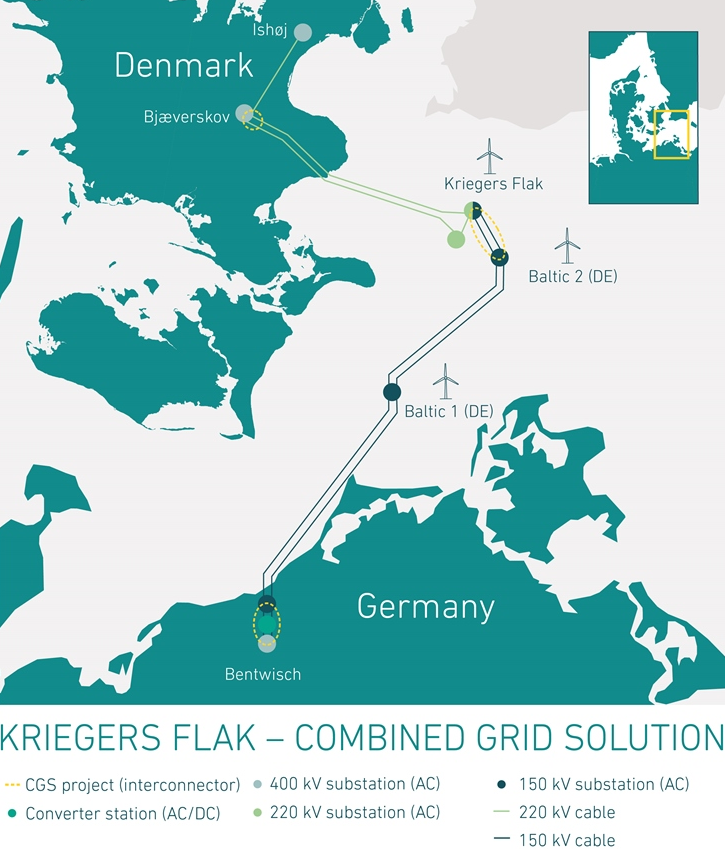