Advertisement
Back to overview
Home Fossil Energy Equinor, Shell, and Total get nod for offshore CO2 storage in Norway

Equinor, Shell, and Total get nod for offshore CO2 storage in Norway

Norway has given permission to Equinor and its partners Shell and Total to develop CO2 storage on the Norwegian Continental Shelf.

The government on Friday said it had granted the company an exploitation permit, with the allocated area for storage of CO₂ located near the Troll oil and gas field in the North Sea, as announced in July 2018.

Equinor is currently performing front-end engineering and design (FEED)-studies on storage with project partners Shell and Total. The storage solution is part of the large-scale carbon capture and storage-project in Norway.

“The government has the ambition to realize a cost-effective solution for full-scale carbon capture and storage in Norway, given that this will result in international technology development. The companies’ effort to mature a storage solution is a prerequisite for a successful project, says Kjell-Børge Freiberg, Minister of Petroleum and Energy.

The allocation of an exploitation permit is necessary to continue the FEED-studies for a CO₂-storage solution. The FEED-studies will also provide more accurate cost estimates necessary for an investment decision.

This is the first exploitation permit for storage of CO₂ on the Norwegian Continental Shelf. The allocation is made under the CO2-storage regulations from December 2014.

Equinor, together with project partners Shell and Total, will now mature the storage concept towards a Plan for Development and Operations (PDO) scheduled for delivery in 2019. An investment decision for the Norwegian full-scale carbon capture and storage project is expected in 2020/2021. 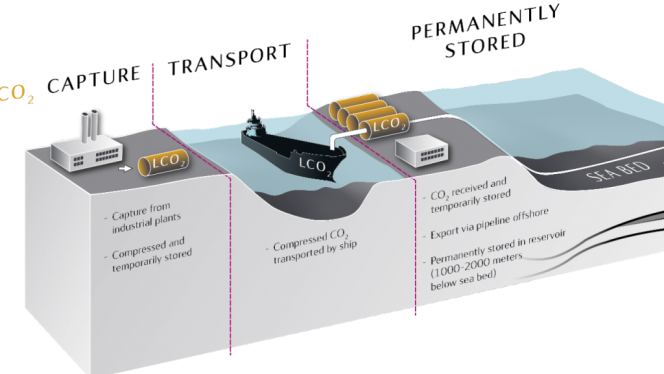 The storage project is part of Norwegian authorities’ efforts to develop full-scale carbon capture and storage in Norway. It will capture CO2 from three onshore industrial facilities in Eastern Norway and transport CO2 by ship from the capture area to a receiving plant onshore located on the west-coast of Norway.

At the receiving plant, CO2 will be pumped over from the ship to tanks onshore, before being sent through pipelines on the seabed to several injection wells east of the Troll field on the NCS.

The first phase of this CO2 project could reach a capacity of approximately 1.5 million ton per year.

The company last year, while it was still named Statoil, shared its sustainability priorities with CEO Eldar Sætre saying that to perform well in today’s global context, “sustainability is essential for business.”

Statoil, now Equinor, in May last year said its next-generation portfolio of oil and gas projects has a CO2 intensity of 3 kg per barrel of oil equivalents, less than 20% of the current industry average – at an average break-even of USD 21 per barrel.

The company said it was already a leading company on CO2 efficient production and on track to realize its 2030 ambition to reduce the CO2 intensity from its current portfolio to 8 kg per barrel of oil equivalents, less than half the current global industry average.