Austrian OMV has agreed to transfer its operatorship of the Wisting oil discovery in the Barents Sea to Equinor for the development phase. OMV made the discovery offshore Norway in 2013.

The two oil firms in June signed a memorandum of understanding (MoU) to cooperate on the Wisting development. Equinor and OMV have now agreed on the final cooperation agreement.

“We are pleased to continue developing the Wisting field and will concentrate on finding the best development solution for the field development,” says Geir Tungesvik, senior vice president for project development in Equinor.

OMV in January 2019 said the development concept being considered for the Wisting was an FPSO with a subsea production system consisting of 19 producers and 15 water injectors.  OMV then said that two FPSO concepts in the form of a circular and a ship-shaped hull were being matured, and the final concept selection in the license group was expected in 2020.

(The article continues below the map) 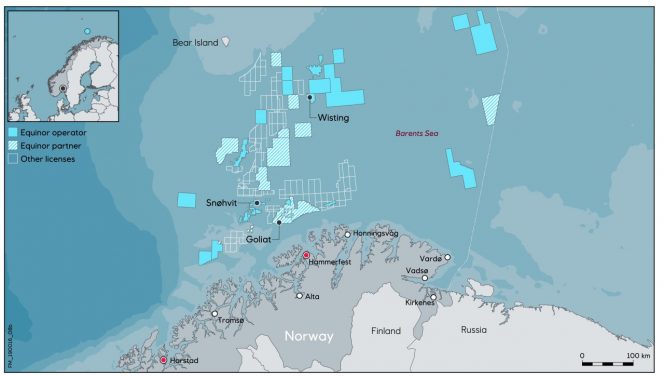 The Johan Castberg (formerly Skrugard) field is situated approximately 100 kilometers north of the Snøhvit-field in the Barents Sea. The field will be developed with an FPSO production vessel. First oil is expected in 2022.

Investment decision for Barents Sea project postponed amid cost growth in supply industry
Posted: 2 months ago
Equinor and PGS extend cooperation for another two years
Posted: 8 days ago
Norwegians to invest €872 million in new gas field
Posted: about 1 month ago