The tug of war between the Suez Canal Authority (SCA) and the owners of the Ever Given containership is heating up despite attempts to settle damage claims out of court.

In the latest turn of events, the UK P&I Club refuted claims from SCA that the Master of Ever Given was to blame for the infamous grounding of the vessel back in March causing a massive traffic jam in the waterway.

The 20,000 TEU, Panama-flagged, containership is owned by Japanese company Shoei Kisen Kaisha and was chartered by Taiwanese Evergreen Marine Corporation.

Reportedly, SCA claimed in a recent press conference that the ship was sailing too fast before it ran aground.

“The owners of the Ever Given and their P&I and hull and machinery insurers look forward to responding to these allegations within the Egyptian court proceedings. Critically it is important to clarify that whilst the master is ultimately responsible for the vessel, navigation in the canal transit within a convoy is controlled by the Suez Canal pilots and SCA vessel traffic management services. Such controls include the speed of the transit and the availability of escort tugs,” the indemnity insurer said.

Tensions continue to brew at a time when the two sides are attempting to reach an ‘amicable’ settlement over damage claims related to the grounding of Ever Given and its refloating. This has resulted in the postponement of the judicial process in Egypt until the second half of June.

The Suez Canal Authority has reduced the value of the required compensation by 40% from $916 million to $550 million, provided that $200 million is paid in advance, while the remaining $350 million is paid as letters of guarantee issued by an “A class” bank in Egypt.

The UK Club welcomed SCA’s reassessment of the claim in light of the valuations of the ship and cargo, adding it was  looking forward to reaching a resolution as soon as is practicable.

The Ever Given’s owners and their P&I and hull and machinery insurers “acknowledge that the SCA is entitled to compensation for their legitimate claims arising out of this incident. We have insured the vessel for certain third party liabilities of the SCA’s claims.”

SCA said during the press conference that an investigation into the grounding has found that the ship was not experiencing any major technical issues prior to the incident and that it was issued with a certificate of seaworthiness after the refloating operation.

Captain Mohamed El-Sayed, Head of Navigation Control, denied reports that the weather conditions played a role in the ship’s stranding. He explained that Ever Given was preceded by 12 other ships in the same convoy with similar tonnages and dimensions, and crossed the navigational course safely without an incident.

It was further stressed that the opinion of pilots that board vessels during transit are not mandatory, but of advisory character, therefore the responsibility of steering the ship rests entirely with the captain.

Hence, SCA believes the owners and operators bear the responsibility for damages that may befall the authority and its property.

The containership, which was arrested on April 13, 2021, after compensation claim talks fell through, remains anchored in the Great Bitter Lakes region since March 29, 2021, awaiting for the legal battle over compensation to be resolved. 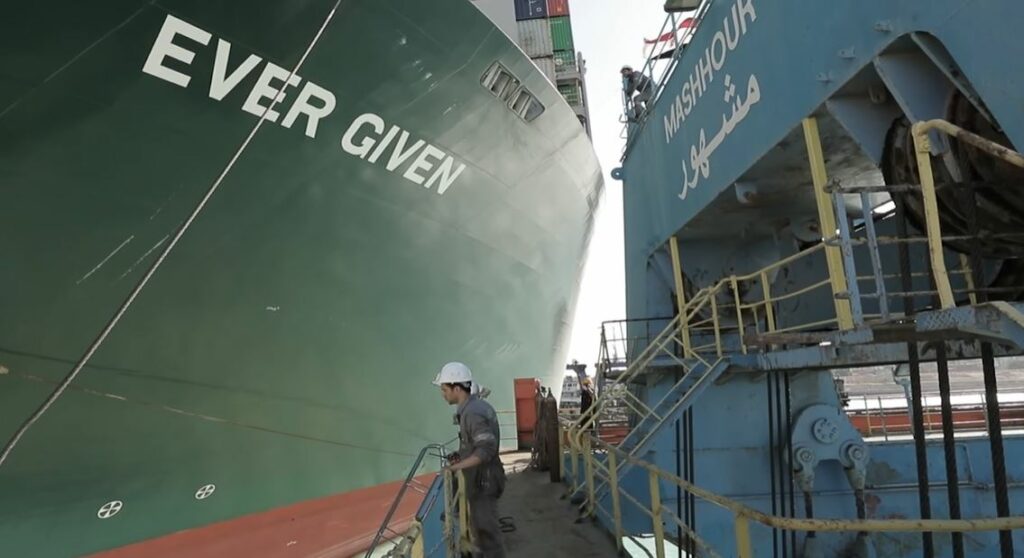 VIDEO: Timeline of Ever Given crisis management
Posted: 6 months ago
New JV to establish LNG bunkering hub in Suez Canal by 2025
Posted: 17 days ago
PHOTOS: Ever Given’s damage after Suez Canal grounding revealed
Posted: 9 months ago