The U.S. Army Corps of Engineers has given the approval to the Unified Command (UC) for the St. Simons Sound Incident Response for the plan to build an environmental protection barrier (EPB) around the grounded car carrier Golden Ray before the wreck is cut into sections and removed.

The plan to build the barrier was developed in coordination with the owners of the vessel and is designed to protect the environment from pollution and debris.

EPB construction is scheduled to begin in approximately two weeks. Construction will require pile driving operations during daylight hours, which, according to the unified command, will result in construction noise.

“There’s no way to remove the Golden Ray without making noise—there’s no way around it,” said Kevin Perry of Gallagher Marine Systems, incident commander for the responsible party.

“The EPB construction noise will be limited to daylight hours. We appreciate everyone’s patience with the noise levels as we work to remove this wreck as quickly and safely as possible.”

As disclosed, the EPB will include large floating boom to help contain surface pollutants, as well as double layer netting to contain subsurface debris.

“We recognize that the floating boom of the EPB alone will probably not be enough to contain surface pollution when we cut into the hull,” said Coast Guard Cmdr. Norm Witt, federal on scene coordinator for the response. “That’s why we’ll have crews and equipment, both inside the barrier and out, ready to respond.”

Contractors will remove the wreck using the VB-10,000 floating crane to cut through the hull with a large diamond-cutting chain. The plan is to make seven cuts and remove eight large sections.

Each section of the Golden Ray, weighing approximately 2,700 to 4,100 tons, will be lifted by the VB-10,000 onto a barge, then transported to a certified off-site recycling facility for further dismantling and recycling.

“Each individual large-section cut will take approximately 24 hours, and once a cut begins, must continue until that cut is complete,” said John Maddox, Georgia Department of Natural Resource state on scene coordinator.

“That means noise through the night during some 24-hour periods. We do not yet know when the cutting will begin, but we will make announcements for cutting operations once they are scheduled.”

To remind, Texas-based T&T Salvage LLC (T&T) has been selected to remove the wreck of the capsized car carrier Golden Ray from St. Simons Sound.

T&T salvage took over from DonJon-SMIT, which was the initial response contractor.

The crew of the vessel, which was carrying about 4,000 cars bound for the Middle East, was evacuated before the ship overturned. 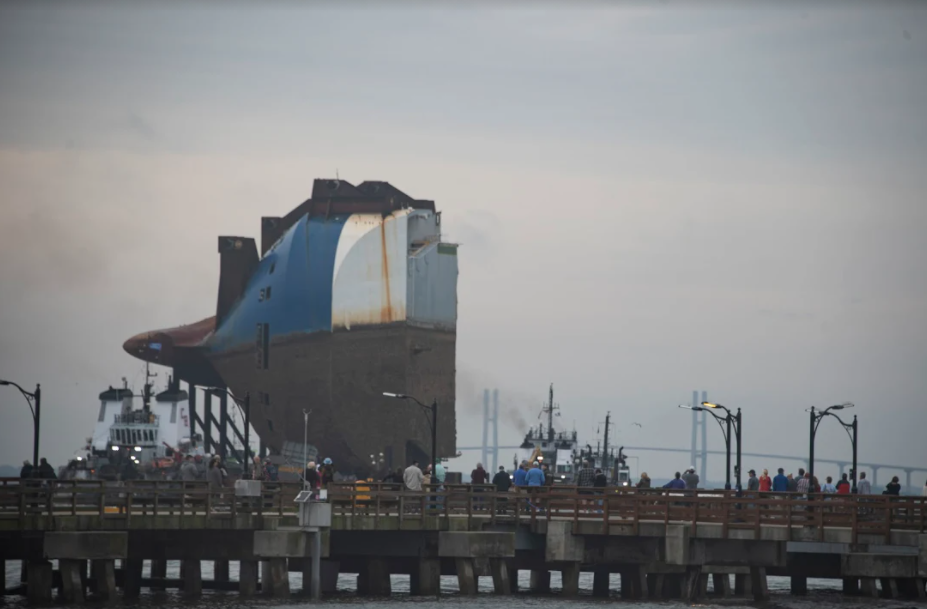