Japanese supplier and operator of offshore floating platforms MODEC has revised its consolidated forecast for the full-year ended December 31, amid the recording of extraordinary loss and the company’s recent business performance.

The company said that the extraordinary loss was being recorded for the necessary repairs on the hull of FPSO Cidade do Rio de Janeiro MV14 worth approximately 17 billion yen (USD 156.1 million).

MODEC said that cracks were found on the hull of the FPSO which has been out of the production since July 2018 and under removal operations from offshore Brazil.

In order to tow out the FPSO to a scrap yard outside of Brazil for the final decommissioning, it has been required to repair the cracks and also to remove NORM (Naturally Occurring Radioactive Material) and coral in a shipyard in Brazil.

“Because sharing of repair costs with ESPADARTE MV14 B.V. which owns the FPSO and insurance payments from our insurers are yet to be determined due to unfinished root cause analysis of the incident, MODEC, INC. and its consolidated subsidiaries (MODEC International, Inc. and MODEC Serviços de Petróleo do Brasil Ltda.) will have no other choice but to record a provision for estimated repair costs of approximate 17 billion yen as of the end of this financial year and recognize it as extraordinary loss in the fourth quarter of 2019,” the company said in a statement.

The repair works will be completed in the first quarter 2020.

Separately, the company said that it has secured two FPSO deals with industry majors.

Specifically, MODEC, Mitsui, MOL and Marubeni have inked a deal to proceed with the deepwater FPSO charter project for Marlim Field off the coast of Brazil.

Based on these agreements, Mitsui, MOL and Marubeni will invest in Marlim1 MV33 B.V., a Dutch company established by MODEC, and the companies will proceed with the project jointly.

The move follows a Letter of Intent for a long-term charter agreement for the deployment of the FPSO which MV33 received in October 2019 from the Brazilian state oil company Petrobras.

The FPSO, to be named FPSO Anita Garibaldi MV33, will be chartered for 25 years under this charter agreement, starting in 2022.

MODEC was awarded a Pre-Front End Engineering Design contract for the FPSO in December 2018 and has now been selected as the turnkey contractor.

This contract is based on a two-step award. The FEED and pre-investment are starting now, with an option for the execution phase under a lump sum turnkey contract setup which includes engineering, procurement, construction and installation for the entire FPSO scopes. Option for the contract is subject to Equinor’s planned investment decision for the Bacalhau project late 2020.

The FPSO vessel will be deployed at the Bacalhau field, Block BM-S-8, located in the giant “pre-salt” region of the Santos Basin some 185 kilometers off the coast of the municipality of Ilhabela/SP, in the state of São Paulo. Equinor’s field partners are ExxonMobil (40%) and Petrogal Brasil (20 %)

MODEC will be responsible for the design and construction of the FPSO, including topsides processing equipment as well as hull and marine systems. The FPSO vessel will be permanently moored at a water depth of approximately 2,050 meters by a spread mooring system to be supplied by MODEC group company, SOFEC, Inc. First oil production is planned in the 2023-2024 timeframe.

The FPSO will be the second application of MODEC’s “M350 Hull”, a next generation new built hull for FPSOs, full double hull design, which has been developed to accommodate larger topsides and larger storage capacity than conventional VLCC tankers, with a longer design service life. The hull will be built by Dalian Shipbuilding Industry Co., Ltd. (DSIC) in Dalian, China.

The FPSO will be MODEC’s 17th FPSO/FSO vessel in Brazil and MODEC’s 9th FPSO in the pre-salt region, as well as MODEC’s first contract with Equinor. 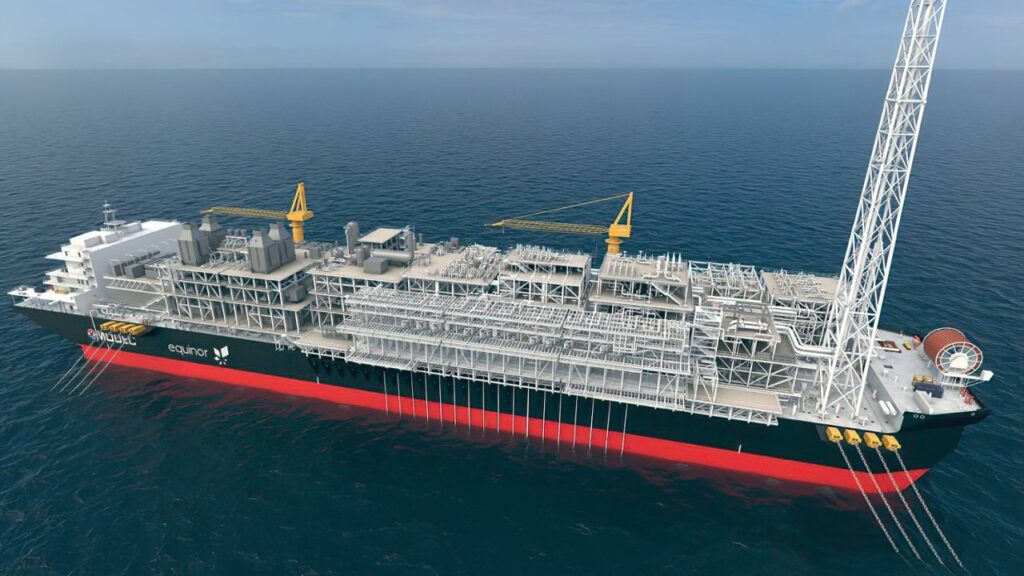