A total of 146 vessels, from the 193 units sent to scrapyards in the second quarter of 2019, were beached in South Asia, the NGO Shipbreaking Platform’s report showed.

More than half of the ships sold to South Asia this quarter changed flag to the registries of Comoros, Niue, Palau and St. Kitts and Nevis just weeks before hitting the beach.

The Platform recorded at least two ships that de-registered from an European flag registry prior the last voyage to South Asia in order to circumvent the legislation.

Both the Maltese-flagged ALPHA MILLENIUM and the Greek-flagged MARVELLOUS, which maritime sources link to Greek shipping company Alpha Bulkers, swapped their flags to Comoros prior reaching the beach of Chittagong, Bangladesh, the Platform said.

Additionally, at least five other vessels, owned by Maersk, Chartworld Group, Costamare and KGJS (Kristian Gerhard Jebsen Skipsrederi), called at EU ports before starting their final voyage towards the shipbreaking beaches, according to the report.

“It is likely that the decisions to export the assets for scrap were taken by these companies while on EU waters, in direct breach of the EU Waste Shipment Regulation. Clearly, more efforts are needed to ensure proper enforcement of current legislation on ship recycling as highest profit seems to be the only decisive factor most ship owners take into account when selling their vessels for breaking.”

Between April and June, Platform sources recorded three accidents that killed at least five workers on the beach of Chittagong, Bangladesh, bringing the total death-toll of the shipbreaking industry this year to at least eight workers.

At least another six workers were severely injured at the Bangladeshi shipbreaking yards last quarter.

In Bangladesh, it was revealed that the shipbreaking company BBC Ship Breaking had been fraudulently given the permission by local authorities to wipe out a protected mangrove forest in order to establish a new yard. Following the filing of a complaint by Platform member organisation BELA, the High Court imposed a six months’ stay on the lease contract. 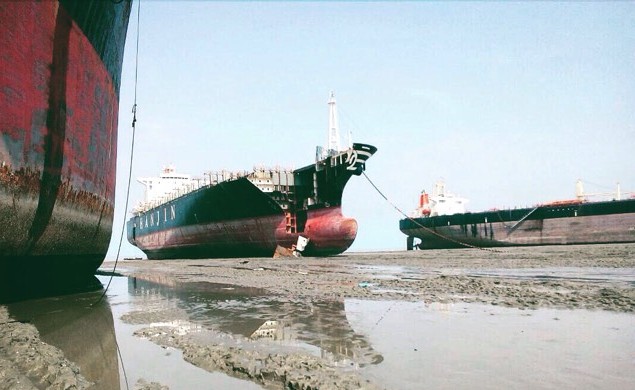