The German Government has set a target to have 6.5 gigawatts of offshore wind power capacity installed by 2020. In Germany the offshore grid network has been beset with problems and delays but is eventually taking off and 2015 will prove to be a major link up year for TenneT the Dutch/German TSO responsible for connecting the offshore wind sector to the German coast with now over half of the target reached.

Unlike the UK, France and Denmark there is only a minority of wind farms, alpha ventus, Riffgatt and Nordergrunde, which have been built or planned relatively close to the coast in the German sector. These wind farms are either already, or planned to be, connected by AC export cables connected through a high-voltage offshore transformer substation platform.

The remaining wind farms have greater distances to the coast which favours HVDC export and need large converter platforms capable of connecting three or more wind farms to the export cable to the coast. As became clear during a session a the WINDFORCE conference in Bremerhaven on HVDC technology, this technology is not new but building an offshore HVDC station is different. The lead times are challenging and so are the partners that need to work together on the new project. However, this year a consortium of Siemens and Prysmian successfully have handed over, as operational, four of these Grid Connector Platforms, BorWin2 and HelWin1, SylWin1 and HelWin2.

BorWin2, located around 100 kilometres off the German coast, north west of the island Borkum, was commissioned at the end of January and is the connection point for the Global Tech I wind farm. The platform was built by Nordic Yards. It can transmit up to 800MW, enough to power around 1 million German households.

BorWin2 is the first large-category offshore grid connection world wide to take up commercial operation with Siemens’ direct current technology. This Siemens HVDC-technology reduces transmission losses for each grid connection, including cable losses, up tot a total loss less than four percent and is especially efficient for cables longer than 80km. Prysmian Group was responsible for the commissioning of the platforms.

The second HVDC platform, HelWin1, was commissioned in February. It is located 85km off the German coast, north west of the island Helgoland and connected via an export cable to the landfall at Büttel. It can transmit up to 576MW, enough power to supply around 700,000 households. It connects the Nordsee Ost and Meerwind Süd/Ost wind farms. HelWin1 was also built by Nordic Yards.

The third platform, SylWinl, was again built by Nordic Yards and handed over to TenneT in April. It is located around 160 kilometres offshore and connected to the converter station in Büttel. This offshore grid connection has a power rating of 864MW, operating at the highest commercially available voltage level of ± 320 kV DC, and is linking the offshore wind farms DanTysk and Butendiek.

The fourth platform to be handed over to TenneT up to now this year is HelWin2. HelWin2 is located about 85 kilometres off the northwest coast and 35 km off the island of Helgoland from which it takes its name. It is connected to the landfall in Büsum and via an underground cable to Büttel in SchleswigHolstein. It connects the Amrumbank West wind farm. The platform can transmit up to 690MW of green electricity, enough to supply nearly 900,000 German households. HelWin2 was built by Heerema Fabrication Group.

DolWin2 which was built by Drydocks World in Dubai, and transported to Europe in mid-2014 by a heavy lift vessel has been in Haugesund in Norway since November 2014 where it is being fitted out. This ABB platform will be handed over to Tennet later this year. The DolWin2 platform uses a new submersible concept that has been developed in cooperation with Aibel, the leading Norwegian offshore engineering company. The entire structure will be floated and towed into position, and then de-ballasted to submerge and settle on the sea bed. This requires no heavy lifting or piling and when decommissioning it requires only pumping air back into the ballast chambers to re-float the structure.

The latest platform to be ordered is the BorWin3 for a Siemens/ Petrofac consortium. It is also the second installation to be built by Drydocks World in Dubai. This project is expected to be handed over to TenneT in 2019.

Looking even further into the future the German Federal Maritime and Hydrographic Agency (BSH) has announced an update to the Federal Trade offshore power grid plan in the German North Sea EEZ (BFO-N). It outlines the spatial planning for the wind farms and grid connections for 13 wind farm clusters and up to 25 converter platforms with a possible 2,500 kilometres of HVDC cables in the next few decades.

Changes made to the previous guidelines include trenching levels reduced from 3 to 1.5 metres and minor changes to the route and location planning, following extensive field trials by the BSH and other federal agencies.

The agency also announced a continuation of the ban on modifications of areas for network infrastructures, which will allow more clusters for offshore wind energy can be planned in the BFO-N as and when required. 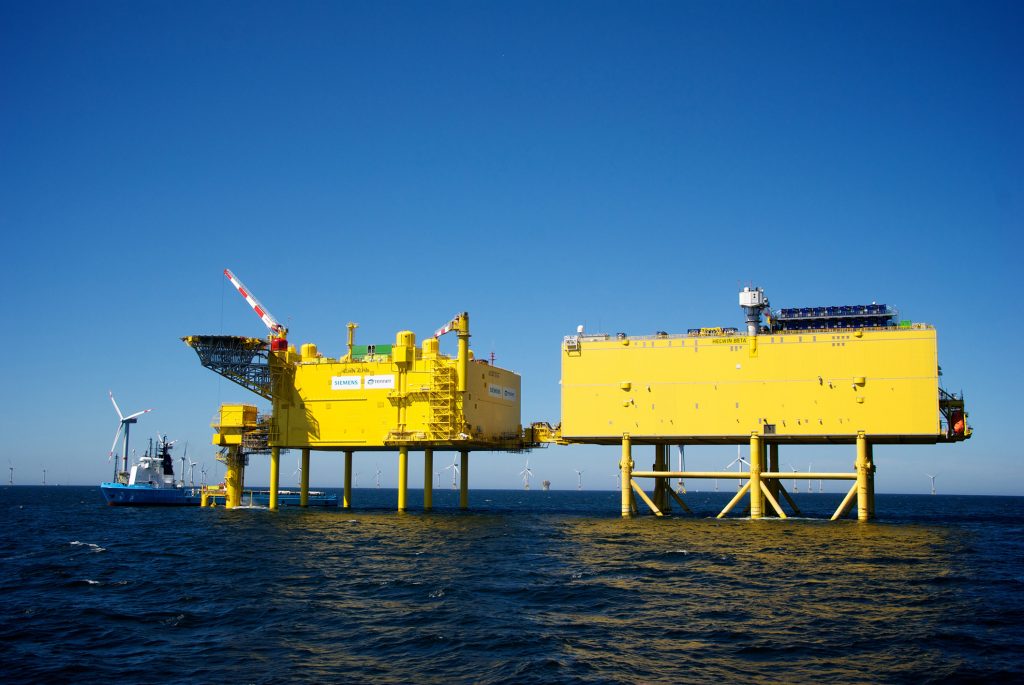