“Decades ago, we set out on a course to advance sustainability; our vision now is to realize carbon-free cruising over the next two decades,” Richard Fain, chairman and CEO, Royal Caribbean Group, pointed out.

“Today (28 October) we are announcing the most important destination of all in our company’s history – Destination Net Zero – an ambitious strategy to cut emissions, protect our oceans, and ensure the viability of the hundreds of destinations that our guests and crew members care deeply about.”

According to Royal Caribbean, Destination Net Zero “builds on decades of progress and a deep sense of responsibility to embed sustainability throughout the organization”.

Over 18 to 24 months, the cruise company will develop goals to be validated by the Science Based Targets initiative (SBTi), the first such pledge for the cruise industry.

The work will begin following the publication of SBTi’s marine transport methodology. Science-based targets show companies how much, and how quickly, they need to reduce their greenhouse gas (GHG) emissions to help limit global warming. Along the journey to net zero, key milestones will be critical to making progress.

One of the most ambitious milestones includes the delivery of a net zero cruise ship by 2035. To achieve these ambitions, the company said it will rely on strong partnerships with governments, suppliers and shipyards to develop alternative and accessible fuels and technology.

Royal Caribbean Group has consistently delivered a new generation of ships 20-25% more efficient than their predecessors. From Silversea Cruises’ ‘Project Evolution’ – the cruise industry’s first hybrid-powered ship set to debut summer 2023 – to the wind farm in Kansas that will offset up to 12% of our scope 1 and 2 emissions per year, Royal Caribbean Group is already executing on its Destination Net Zero strategy to drive the development of emissions-reducing technology and alternative fuel solutions.

“This is another important step on the serious and ambitious path to preserve the health and allure of the sea and the beauty of the oceans,” William K. Reilly, chairman, Royal Caribbean Group’s board of directors’ safety, environment, and health committee, said.

The next chapter of a 30-year voyage

Royal Caribbean Group’s journey to reducing its environmental footprint began nearly 30 years ago with Save the Waves, an ambitious effort that grew from a recycling program into a company-wide approach to embedding challenging, achievable, measurable sustainability targets into the bedrock of the company’s culture.

In 2016, the group embarked on a partnership with World Wildlife Fund (WWF). With the goal of ensuring the long-term health of the oceans and fulfilling a vision of more sustainable cruising, Royal Caribbean Group established ambitious initial 2020 targets to reduce its environmental footprint, support ocean conservation globally and raise awareness among the company’s more than 5 million passengers about the importance of ocean conservation.

Earlier this year, it announced it had met or exceeded its 2020 goals, with the exception of a sustainable seafood sourcing target (now expected to be met by 2022) that was impacted by the travel suspension from the pandemic.

“While we may not have all the answers now, this comprehensive company-wide strategy amplifies our focus on long-term emissions reduction and provides us a roadmap for how to get there.”

“Through our partnership, Royal Caribbean Group has been on a journey to improve their overall sustainability. Achieving net zero emissions no later than 2050 will require innovation and collaboration at scale, and WWF looks forward to working together to make progress toward this milestone.” 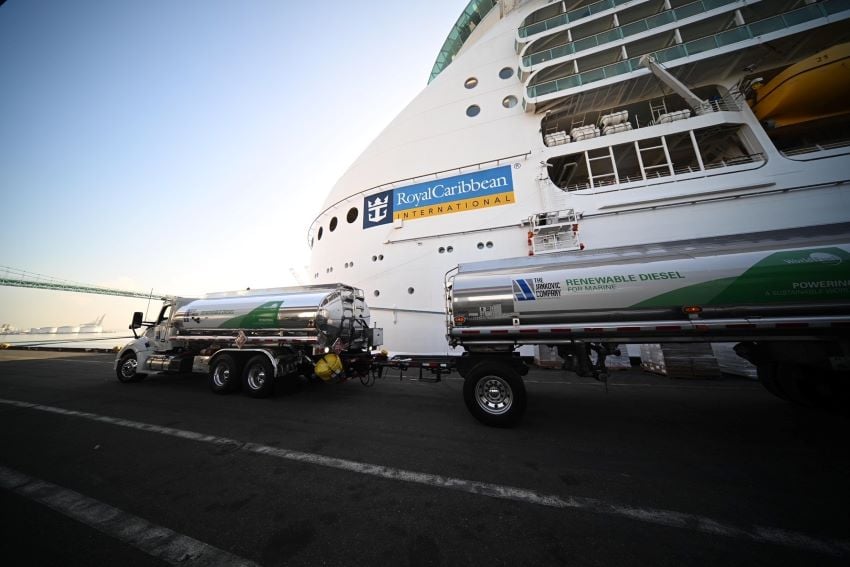