Qatar Petroleum has contracted Samsung C&T Corporation for the expansion of the LNG storage and loading facilities in Ras Laffan, as part of the North Field East project.

The contract, valued at more than $2 billion (including options), was awarded on a lump sum basis and is the second major onshore EPC contract award for the NFE project.

On the 8th of February 2021, QP awarded the EPC contract for the construction of four LNG mega-trains with associated facilities to Chiyoda Technip Joint Venture.

The award of this contract for the expansion of the LNG storage and loading facilities represents yet another milestone on the road to substantially increase Qatar’s LNG production capacity.

Both contracts represent the culmination of front-end engineering and design work that began in early 2018, Qatar Petroleum said in its statement.

When completed, the NFE project will increase the State of Qatar’s LNG production capacity from 77 million to 110 tons per annum (mtpa).

The second phase of the planned LNG expansion, the North Field South (NFS) project, will further increase Qatar’s LNG production capacity from 110 mtpa to 126 mtpa by 2027.

Commenting on this occasion, Saad Sherida Al-Kaabi, Minister of State for Energy Affairs, and president and CEO of Qatar Petroleum said: “This contract provides for the expansion of existing infrastructure required to ensure the safe loading and on-time delivery of our LNG cargoes to our international customers across the globe.”

He added that the contract scope includes three LNG tanks and three LNG loading berths for NFE, and options for two LNG tanks and one LNG berth for NFS project, and all associated pipes, lines and loading lines.

This contract also includes the expansion of systems that target the elimination of flaring during the loading of LNG ships. In addition, recovery of ‘jetty boil-off gas’ will help reduce greenhouse gas emissions (GHG).​ 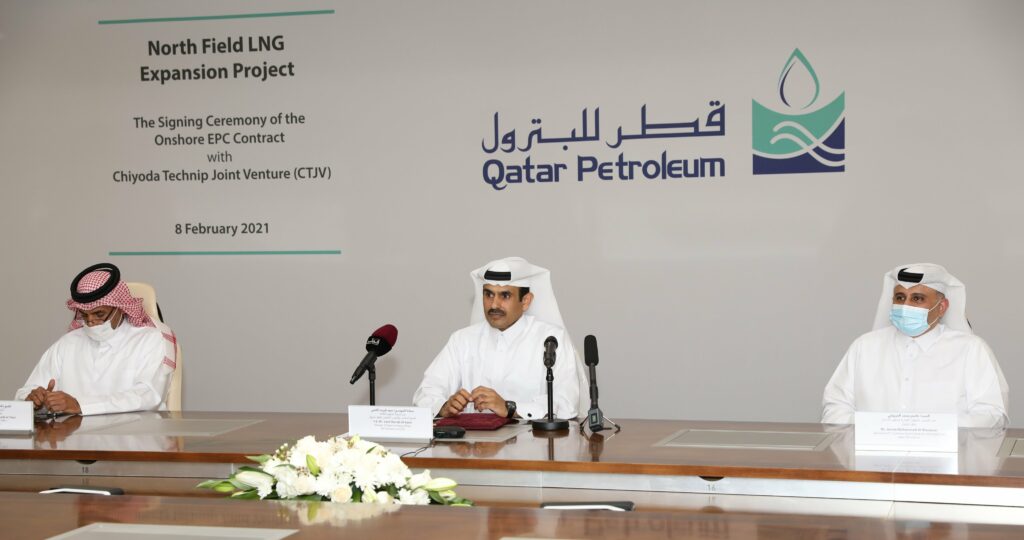