Russian shipping giant has teamed up with Shell to complete the first LNG bunkering of an Aframax tanker in the United States.

Sovcomflot’s Gagarin Prospect, on long-term charter to Shell, was en-route from Corpus Christi to Europe.

The vessel received 1,075 cubic metres of LNG from the Shell NA LNG chartered Q-LNG 4000 outside the Port of Canaveral, Florida. This represented the first ever ship-to-ship LNG fuelling of a large capacity Aframax tanker in the USA.

This event demonstrates the rapid expansion of LNG bunkering infrastructure globally, Sovcomflot said in its statement.

The deviation from the vessel’s usual voyage route amounted to less than 150 nautical miles (0.5 days) and the bunkering time was 11 hours. LNG can now be supplied ship-to-ship on the principal transatlantic tanker trade routes between Europe and the US Gulf, and the US Gulf and East Coast Canada, which has seen traffic increasing rapidly as a result of the growth in WTI crude exports from the US Gulf.

Gagarin Prospect is the lead vessel in SCF Group’s pioneering series of dual-fuelled Green Funnel Aframax tankers, delivered in 2018/2019, and one of two in the series on long-term time charter to Shell.

The continued expansion of LNG fuelling in the United States facilitates the growing use of vessels able to utilize LNG in their main engines, auxiliaries and boilers, providing for a much reduced emissions footprint compared with conventionally fuelled tankers.

Sergey Popravko, SCF Group, CEO said, “We are pleased that Shell has opened up LNG fuelling along this important transatlantic trade route, demonstrating that marine LNG fuelling infrastructure is no longer limited to hubs in Northern Europe and Singapore.”

Karrie Trauth, general manager, Shell Shipping & Maritime Americas, said, “As part of Shell’s target to be a net-zero emissions energy business by 2050, in step with society, we are working with customers across every sector to help them decarbonize. LNG is the choice today for new builds to help slow the rate of global greenhouse gas emissions while we work hard at developing zero-emissions fuels. I’m pleased to see the first Aframax tanker fuelled with LNG in the United States as this is an important milestone for the industry.” 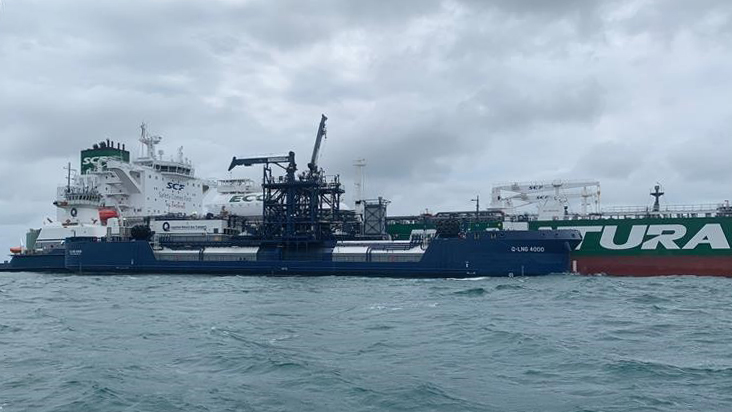