Uruguay’s state-owned oil and gas company ANCAP has awarded two offshore blocks in the second instance of the 2022 Open Bidding Round to three companies, enabling YPF and the consortium consisting of UK-headquartered Shell and the U.S.-based APA Corporation to expand their footprint off Uruguay.

ANCAP disclosed the award of these two blocks off Uruguay last week while explaining that three bids for the exploration and production of hydrocarbons were received in the second instance of 2022 for blocks OFF-4 and OFF-5.

YPF, the Argentinian National Oil Company (NOC), submitted bids for both offshore blocks while a consortium formed by Shell, through its subsidiary BG International, and APA Exploration LDC – part of APA group – submitted a bid for the OFF-4 block. After their proposals were analysed, ANCAP opted to award OFF-4 to Shell/APA consortium and OFF-5 to YPF.

According to Uruguay’s state-owned player, the winning bid for the OFF-4 deepwater offshore block, which is immediately adjacent to Challenger Energy’s OFF-1 shallow water exploration block, commits the consortium of Shell and APA to undertake work on the OFF-4 block in the initial four-year exploration period, including 3D seismic acquisition.

On the other hand, YPF has committed to carry out an extensive technical work programme on the OFF-5 deepwater offshore block in the initial four-year exploration period.

Moreover, the nominal investment associated with the work presented amounts to $31 million for both blocks, outlined ANCAP, adding that once these offers are formally approved, it will put the wheels into motion to sign the contracts with the winners of each block.

“It should be noted that such hydrocarbon exploration and production contracts establish that the companies assume all the risks, costs and responsibilities of the activity and such costs will only be reimbursed in the event of commercial production,” highlighted ANCAP.

These two blocks have been awarded in addition to the award of the OFF-1 block to Challenger in May 2020, the awards in May 2022 of the OFF-2 and OFF-7 blocks to Shell, and the OFF-6 block to APA.

Based on Challenger Energy’s statement, the aggregate value of work now committed across blocks OFF-2, OFF-4, OFF-5, OFF-6 and OFF-7 by Shell, APA and YPF during the next four years – in respect of both technical and exploration activities including well drilling – is estimated by ANCAP to be in excess of around $230 million.

Furthermore, Challenger Energy stated that it considers “the rapid entry through the course of 2022 into Uruguay of well-regarded international companies, and their commitments to undertake sizeable and meaningful work programmes in the near-term (including 3D seismic acquisition and new well drilling), validates both the company’s decision to enter Uruguay in 2020, and underscores the solid technical foundation and excellent value proposition represented by the OFF-1 block.”

Moreover, the firm elaborated that its OFF-1 licence area, and the broader offshore Uruguay play system, are analogous to offshore Namibia, where there have been recent prolific, conjugate margin discoveries made by TotalEnergies (Venus-1 oil discovery) and Shell (Graff-1 oil discovery), and where reported multi-billion-barrel Cretaceous turbidite reservoirs have been encountered. Challenger justified this view by explaining that the OFF-1 licence exhibits the same Aptian age play source rock and petroleum systems on existing 2D seismic.

Eytan Uliel, Chief Executive Officer of Challenger Energy, said: “This dramatic increase in interest in Uruguay and the neighbouring region is directly related to the very sizeable discoveries made in the conjugate margin Orange Basin in early 2022, and through the course of 2023, we hope to move forward with a farm-in, so as to capitalise on that increased interest and allow for accelerated work on our block.”

Challenger also disclosed that the OFF-1 block contains a management estimated resource potential exceeding 1.5 billion barrels of oil equivalent (BBOE), based on “current mapping from multiple exploration plays and leads in relatively shallow waters, and with significant upside running room.”

The firm outlined that this estimate is corroborated by formal resource estimates provided by ANCAP of 1.35 BBOE as a P50 expected ultimate recoverable resource. 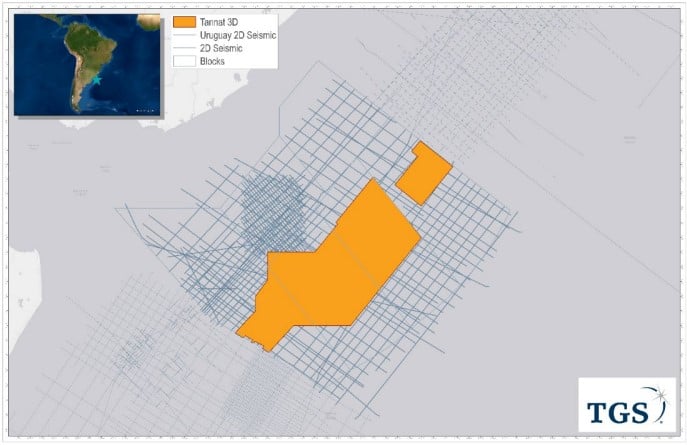