Siccar Point Energy has completed drilling the Blackrock exploration well 204/5b-2 in the West of Shetland, and according to the CEO, the result is encouraging. 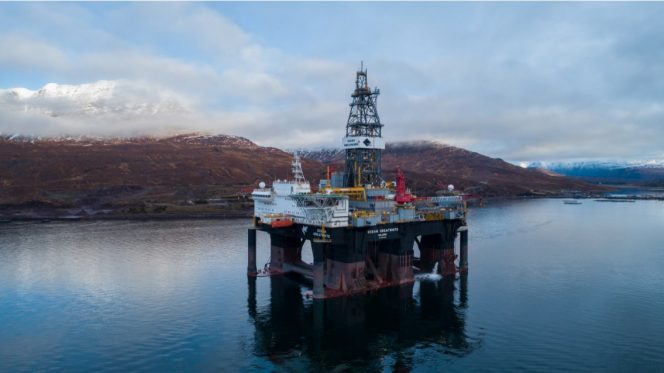 Located 140 kilometers north-west of Shetland, the Blackrock license is located directly between the Equinor’s Rosebank oil field and Siccar-operated Cambo oil field. The well was drilled with the Diamond Ocean GreatWhite semi-submersible on Licence P1830 in 1115 meters of water, 10km north of the Cambo field.

The target of the well was the intravolcanic Paleocene Flett reservoirs of the Colsay Member which lie on-trend with equivalent oil filled sandstones in the Rosebank field.

The well encountered a 34m gross package of intra-volcanic siliciclastic sediments which contained a number of thin oil-bearing sandstones from which oil samples were obtained. Gas was also encountered in the overlying Hildasay supravolcanic Member, Siccar Point said.

According to the company, the well has proven the existence of intra-volcanic charged reservoirs between the Cambo and Rosebank fields.

Jonathan Roger, CEO of Siccar Point said: “I am very encouraged by this well result and look forward to further exploring this material exploration play with our partners.”

As for the rig being used, owned by Diamond Offshore, the Ocean GreatWhite weighs in at 60,800 tonnes and is a 6th generation harsh environment drilling rig capable of drilling down to 10,000 meters in 3,000 meters of water.