Officials in many localities nationwide are preparing to encounter flooding situations, as it has been forecast that the depression in the South China Sea will trigger continuous heavy raining in Thailand.

Deputy Prime Minister Plodprasop Suraswadi on Thursday visited Ayutthaya to evaluate the water situation in the province, which was heavily afflicted by the great floods of 2011.

Mr. Plodprasop told reporters during his visit that the government will spend 50 billion baht dredging a new canal from Bang Ban district to Bang Sai district of Ayutthaya to add a water channel that would allow water to be carried out to sea and prevent flooding in the long run.

In Nonthaburi, provincial governor Wichien Phutthiwinyu on Thursday checked on the level of the Chao Phraya River, finding that the water level is not yet worrisome. However, the governor noted that continuous downpours could still cause inundations in many spots.

In Phichit, the heavy downpours have triggered forest runoffs from Phetchabun mountains, which flowed into Thap Khlo district and inundated almost every road, rendering them impassable to all vehicles.

Those in the districts of Sak Lek ,Wang Saiphun, Thap Khlo, and Dong Charoen who live near waterways and the Phetchabun mountain ridge have been urged to exercise caution against flash floods and forest runoffs. 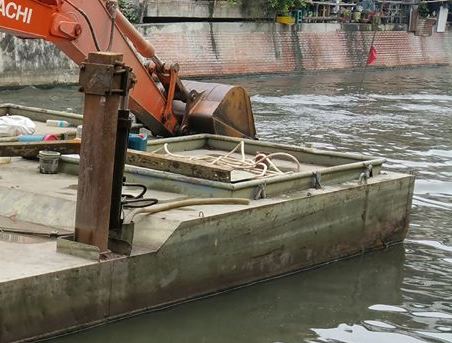