Ken Johnson uses chemistry to study biology. This unusual approach is helping him understand why and how much microscopic algae grow in different parts of the world ocean. With the entire ocean as his sample bottle, Johnson’s challenge is determining where to monitor. Ideally, to get enough data, he needs to sample everywhere, simultaneously and continuously. By enlisting the help of some robotic floats, Johnson is on track to doing just that—and all from the comfort of his office chair.

In 2007, Johnson, an MBARI chemist, started out by outfitting one robotic Apex float in Hawaii with nitrate sensors. Every five to ten days, the Apex float descends to 1,000 meters. On its return to the surface, it records several measurements to create a vertical profile of the water column. This specialized float is part of the larger Argo network, which consists of more than 3,000 profiling floats worldwide. Each float carries sensors measuring temperature, salinity, and depth.

Johnson’s nitrate sensors are now on 12 of these floats, which also boast oxygen sensors. The data from these floats are transmitted via satellite to MBARI computers, which run a web-based program allowing any public user to view the data in real-time.

Johnson uses oxygen measurements to estimate the amount of oxygen that microscopic algae (phytoplankton) are producing as a byproduct of photosynthesis. He measures changes in nitrate, an essential algal nutrient, as an indicator of phytoplankton growth. Since variations in nitrate and oxygen concentrations indicate where phytoplankton blooms ebb and flow, Johnson’s goal is to extend those long-term observations to more areas of the oceans.

Currently the 12 Apex floats hosting Johnson’s nitrate sensors are scattered around the world’s ocean basins. Seven are in equatorial regions near Hawaii and Bermuda. Three more are drifting in the far northern Pacific Ocean. One is near the Southern Ocean, and one is in the Greenland Sea. Though floats are at the mercy of the ocean currents, most do not move far from where they are deployed. The only float that traveled any significant distance is in the Southern Ocean.

Normally, oceanographers measure the abundance of phytoplankton by deploying water-sampling equipment from ships, or analyzing data from ocean-color satellites. Ship-based measurements, however, require an enormous amount of time, money, and fuel, and cover limited areas for limited amounts of time. Ocean-color satellites give a rough estimate of phytoplankton density, but cannot “see” through clouds or detect color more than 30 meters from the sea surface.

Johnson’s instruments can provide more detailed information about when, why, and where phytoplankton blooms occur. Data collected from multiple regions and over longer time periods help researchers track phytoplankton growth on a global scale. Additionally, by measuring phytoplankton density, researchers can also estimate the amount of carbon dioxide consumed through photosynthesis.

Johnson believes that the constant streams of data from his sensors provide a more representative view of what is going on in the water than is possible using a ship or satellite. He hopes these detailed biogeochemical measurements provide insight into the foundation of the ocean food web. Continuous observations like Johnson’s may help scientists differentiate between year-to-year variations and long-term changes in phytoplankton. Starting a long time-series now is relevant in light of controversial studies that point to phytoplankton declines of one percent per year in the last 100 years. Johnson’s research could help validate or contradict this finding.

Ideally, Johnson would like to have several sensor-equipped floats located near one another in each ocean region (Hawaii has five). Neighboring floats would allow him to cross-check the sensor data across individual floats, and ensure the data are not just an anomaly. What isn’t clear yet is how many sensor-equipped floats he needs to do this.

At this point, Johnson must also decide where else in the world’s ocean to place additional nitrate and oxygen sensors. Plans to place sensors on a float in the eastern tropical Pacific, a region of markedly low oxygen concentrations, have been delayed by a continuous series of ship breakdowns. Because of the risk of piracy, deploying a float with sensors off India in the Indian Ocean was halted. With no ship willing to travel there, Johnson may need to ask the Navy’s help to deploy a float in this area.

With over 3,000 floats to choose from, Johnson can’t put sensors on all of them, though he has 30 sensor packages built and ready to go. Funding new sensors becomes a question of economics. Just what are these data worth? Well, in a nutshell, $50,000 for one float to run five years with oxygen and nitrate sensors. To outfit more than 1,000 floats, which Johnson would ideally like to do, would cost over $50 million. “We could fire everyone at MBARI to fund the entire project, “Johnson jokes, “but I don’t think I would be very popular.”

In addition, Johnson would like to equip floats with pH sensors. To get a more accurate image of algae production at the surface, Johnson is using pH measurements to calculate how much carbon dioxide is consumed and released by the phytoplankton during photosynthesis. Measurements of pH indicate the amount of carbon dioxide in seawater. Compared to oxygen, ocean pH is a better gauge of phytoplankton production near the surface. Oxygen measurements can be inaccurate near the surface since oxygen mixes rapidly with the atmosphere.

Johnson’s pH sensors would be tested first on the Apex floats near Hawaii and Bermuda, where monthly data from the NSF funded Hawaii Ocean Time-series (HOT) already exist. Comparisons with the float data will confirm that Johnson’s sensors are working correctly.

However, Johnson must balance his desire to equip more floats with his sensors along with his desire to add new pH sensors. As Johnson explains, “Outfitting more floats and adding more sensors is like deciding if you want the two-car garage and the granite countertops. You just may not be able to do it all.”

Adding sensors to 1,000 floats would give Johnson and other researchers an essential and comprehensive view of the relationship between nutrients and phytoplankton. With more nitrate readings, researchers can identify where phytoplankton are growing and declining. Oxygen sensors can indicate where areas of low oxygen exist, especially crucial following the discovery of a worldwide decrease in oceanic oxygen.

Furthermore, researchers can track ocean acidification through global measurements of ocean pH. This knowledge represents a significant piece of the puzzle to help ocean chemists answer the biologist’s ultimate question: how much carbon is going in and out of the ocean? With phytoplankton levels fluctuating worldwide, the carbon piece is vital for understanding the productivity puzzle.

As Johnson discovered in his previous ocean-monitoring efforts, putting new sensors in the ocean can sometimes lead to new discoveries or generate new research questions. For example, Johnson’s newest Arctic float, which only came online in August 2011, has shown low nitrate concentrations that have researchers puzzled. Nitrate levels are generally high in the high latitudes, and the Arctic station was expected to show similar levels. But it doesn’t. Knowing he needs more sensors and time to tell if the data are real, Johnson says, this anomalous data “is not a big deal yet, but I could be convinced otherwise once the float has been running for a full year.” 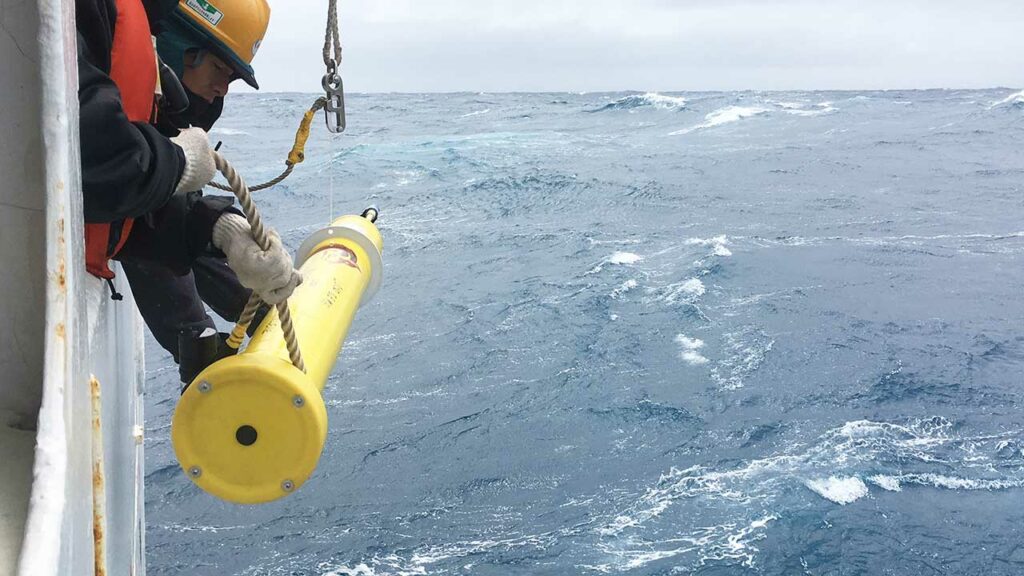