Offshore drilling contractor Valaris has received contract terminations for two rigs operating offshore Angola, one from Total and the other one from Chevron, but has also secured revenue backlog of $100 million. 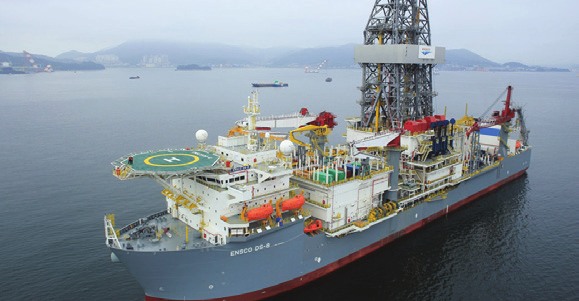 In an update on Thursday Valaris said it continues actively working to recover or replace the blowout preventer (BOP) stack on Valaris DS-8 drillship following a non-drilling incident earlier this month.

On March 19, 2020, the company received a termination notice for the drilling contract for the 2015-built Valaris DS-8, which is operating for Total offshore Angola.

Valarsi said it is in discussions with the customer regarding the notice. The drilling contract represents approximately $150 million of the company’s contracted revenue backlog of $2.5 billion as of December 31, 2019.

The operating day rate for Valaris DS-8 is approximately $620,000 per day. The company has loss of hire insurance for $602,500 per day after the expiration of a 45-day deductible waiting period through the end of the contract in November 2020.

If the contract is terminated, the company will seek to recover losses incurred in accordance with the terms of this insurance policy, which would largely offset the lost backlog noted above. There can be no assurance as to the timing or amount of insurance proceeds paid to the company, Valaris said.

Valaris has also received a notice of contract termination from a customer for Valaris JU-109. The jack-up rig was scheduled to operate for Chevron offshore Angola until July 2021.

As a result of this termination, the rig’s contract is now expected to end in mid-April 2020 and contracted revenue backlog will be reduced by approximately $50 million. The company expects to receive additional notices of contract terminations and requests to renegotiate contract day rates and terms in light of increased market uncertainty.

Since the beginning of March, Valaris JU-87 was awarded a one-well contract with Cox in the U.S. Gulf of Mexico that started in mid-March, with an estimated duration of 30 days that added approximately $1 million of contracted revenue backlog.

From the period between mid-February until the beginning of March, Valaris executed several new contracts and contract extensions with associated revenue backlog of approximately $100 million.

Valaris MS-1 semi-sub has been awarded a three-well contract with Santos offshore Australia that is expected to start in first quarter 2021, with an estimated duration of 155 days.

Valaris 8505 semi-submersible has been awarded a one-well contract with Lukoil Upstream Mexico that is expected to start in mid-November, with an estimated duration of 80 days.

Valaris JU-118 (Joe Douglas) jack-up has been awarded a three-well contract with Fieldwood offshore Mexico that started in mid-March, with an estimated duration of 425 days.

Finally, Valaris JU-144 (EXL II) jack-up has been awarded a two-well contract with Fieldwood offshore Mexico that is expected to start in April, with an estimated duration of 200 days.

In addition, the company is withdrawing its first quarter and full year 2020 financial guidance that was provided in February.