IMI, a JV company between Lamprell, Saudi Aramco, Bahri, and Hyundai Heavy Industries, has announced the name for the GustoMSC-design jack-up rig which is expected to be built in 2021. The offshore oil and gas drilling rig will be named “IMI-2030.” 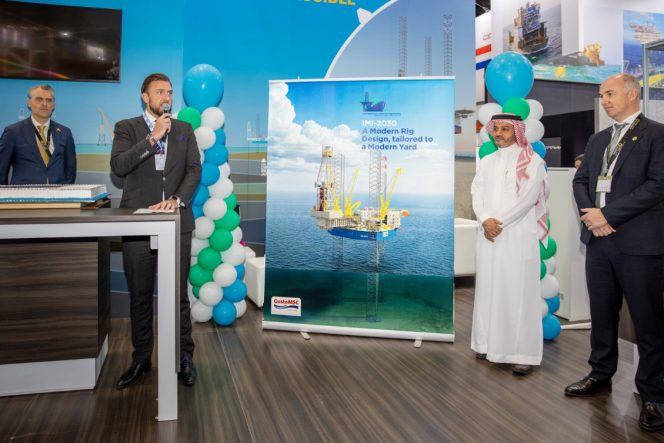 IMI is responsible for the management of the multi-billion dollar maritime and offshore yard being built in Saudi Arabia’s Ras Al-Khair. Once built, the yard will be able to construct four offshore rigs per year.

In the words of both IMI and National Oilwell Varco-owned rig designer GustoMSC, the rig’s name was inspired by Saudi Arabia’s Vision 2030 – the Kingdom’s plan for sustained economic diversification and reduction of reliance on oil.

Fathi K Al Saleem, CEO of IMI, said: “The naming of this jack-up drilling rig is a major step for IMI. The utilization of “2030” in the name was important to the management team as it was inspired by the Kingdom’s 2030 Vision. IMI and the King Salman Complex is one of the major projects forming part of this wider strategy.”

The naming of the rig which has yet to be built comes less than a month after GustoMSC and IMI signed a design licensing agreement that will enable IMI to construct and deliver drilling rigs to its clients.

IMI in October said it would be fully prepared for its first production operations anticipated in 2021, as a result of the GustoMSC deal. GustoMSC is responsible for delivering the basic design and will tailor one of its CJ-series jack-up drilling rigs.

“The design retains its key and field-proven features such as the sturdy X-bracing leg design, the Rack & Pinion Jacking Systems, and X-Y cantilever system. The IMI rig design is targeted to be a ‘Fit For Purpose’ solution that enables safe, efficient and reliable drilling for Saudi Arabia,” GustoMSC said in October.

During the naming ceremony, Nils van Nood, Managing Director of GustoMSC, adds: “Contributing to the Saudi Vision 2030  is a great opportunity for us to serve key clients in Saudi Arabia and the region. Given how important the Saudi Vision 2030 is to IMI and to GustoMSC, the name was highly appropriate. We are proud of this partnership and look forward working together during the basic & detailed design phases and beyond.”

About one year ago ARO Drilling, formed in October 2017 as a joint venture between Rowan and Saudi Aramco, announced plans to order at least 20 drilling jack-ups for construction at IMI. It is expected that the initial rig ordering will get finalized in the second half of 2020.