ALE, a global heavy-lift specialist, has completed offshore and marine operations on the ACG field in the Caspian Sea offshore Azerbaijan.

ALE said on Tuesday that the company was contracted for a complex scope of work, involving the load-out of two jackets, weighing and jack-up of the topsides, strand jack skidding load-outs, ballasting, and mooring as well as the offshore floatovers for two topsides.

The global heavy lifting contractor began the first stage of operations in July 2016 with the ballasting load-outs of the production and riser (PR) and the living quarters and utilities (QU) platform jackets, weighing 13,977t and 12,369t respectively.

The company was contracted by the jacket constructor BOS Shelf to provide the full external ballast system and engineering, as well as the ballast system design and calculations.

The jackets were loaded-out onto the same STB-1 launch barge using the client’s push/pull skidding system.

The next phase involved the weighing and jack-up of the QU topside for a separate client using the Mega Jack system. Load cells were used to weigh the deck at 12,789t and the Mega Jack was deployed to jack-up the topside to 14.5m.

The load-out frame was transferred under the topside, before performing the skidding loadout of the QU deck with the use of 900t strand jacks and by ballasting the barge. ALE also supplied a large spread of mooring winches ranging in capacity from 20t to 85t.

Matthew Hodgson, engineering manager for ALE offshore services, said: “This is a great project for ALE to be working on. We are involved in multiple, complex scopes of work with multiple clients and dedicated experts from different ALE branches and divisions – each with their own specialisms being deployed.

“Our Offshore-Services team, who are also contracted for the engineering and ballasting for the load-out and floatover operations, have designed and fabricated bespoke ballast piping to fit around pre-existing pipework on the barge, which will serve for all ballasting requirements for the entire project thus saving our clients time and money.”

The final phase involved the load-in of the load-out frame, followed by the weighing, jack-up, load-out and finally floatover operations of the PR topside.

According to operator BP, the Azeri-Chirag-Deepwater Gunashli field, or ACG for short, is located about 100km east of Baku and represents the largest oilfield in the Azerbaijan sector of the Caspian basin.

Since first oil, ACG has achieved more than 3.2 billion barrels of oil production. 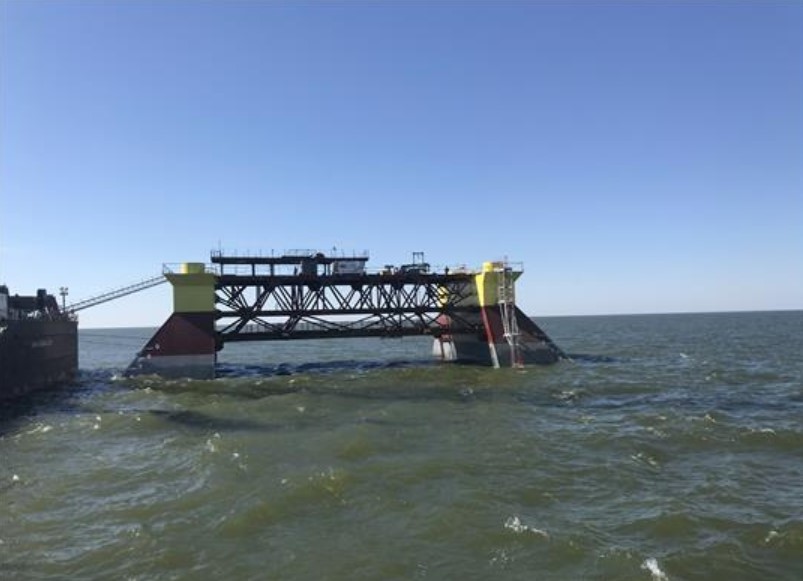