Advertisement
Back to overview
Home Fossil Energy Australia: LNG Limited Says Carbon Tax Will Have No Material Impact on Company

Australia: LNG Limited Says Carbon Tax Will Have No Material Impact on Company

As a result of shareholder enquiries the Directors of Liquefied Natural Gas Limited  provided a brief overview of the impact of the Australian Government’s recently announced carbon tax on the  Company’s 100% owned Fisherman’s Landing LNG Project, in the Port of Gladstone, Queensland.

The proposed Fisherman’s Landing LNG Project has a guaranteed LNG production capacity of 3 million tonnes per annum and will use the Company’s wholly owned and developed OSMR® LNG process, which generates around 30% less carbon emissions than projects using traditional LNG liquefaction technologies.

The Company in its project financial modelling has always included provision for a potential carbon tax, as part of its operating costs, on 100% of the assessed carbon emissions. The announced carbon tax requires LNG projects to acquire carbon credits for only 50% of their annual carbon emissions and includes fixed carbon credit prices over the first 3 years (2012 to 2015), commencing at $23/tonne and escalating at 2.5%pa. Thereafter a carbon credit trading scheme will be  introduced with a transitional minimum and maximum price to be applied by the Australian Government. While some uncertainty exists in relation to carbon credit prices after the 3 year fixed price period the Company considers that it has adopted a conservative approach in its project financial modelling and does not expect the announced  carbon tax to have any material impact on existing project return calculations.

The following graph compares the Greenhouse Gas (“GHG”) emissions of various Australian and International LNG plants. The GHG intensity of an LNG plant is measured in tonnes of carbon dioxide (“CO2”) emitted per tonne of LNG  produced. The GHG emissions include CO2 removed from feed gas, which can vary significantly from one plant to another, as well as CO2 generated from combustion of fuel to power the plant, flare gas and the operating environment.

Several features of the OSMR® LNG process, including the use of a combined heat and power plant recovering waste heat from the gas turbines, allows the Fisherman’s Landing LNG Project to be the ‘best in class’ in reducing CO2 emissions with a confirmed design rate of 0.21 tCO2e/tLNG.

Company Director and Chief Technical Officer, Paul Bridgwood said “the substantial commercial advantages of our technology, being around half the capital cost and with a fuel bill around 30% less than other traditional technologies, is further improved as we will pay around 30% less carbon tax. Also, our wholly owned and developed boil off gas (“BOG”) recovery system allows us to eliminate flaring during normal operation and during ship loading, something which other processes struggle to achieve. Patents applications have been lodged to protect the Company’s OSMR® LNG process and BOG system

The Company believes the introduction of a carbon emissions tax will bring changes in future LNG plant designs in Australia towards adopting ‘Best Available Technology’, such as the Company’s OSMR® LNG process, to reduce carbon emissions. The Company has positioned itself to be a low capital and operating cost LNG plant provider as well as to produce the lowest possible level of emissions on which the carbon tax is assessed. 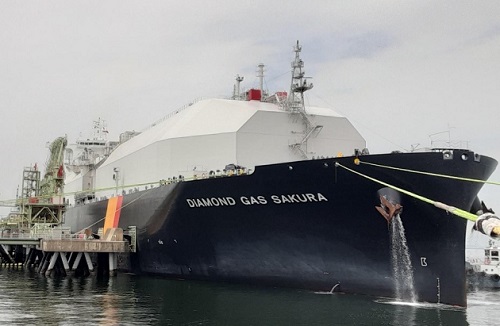