The Zola prospect is a very large Triassic tilted fault block on trend with the giant Gorgon gas field. One of the largest undrilled structural features in the Carnarvon Basin, Zola is covered by high quality newly reprocessed 3D seismic data and is considered a moderate risk prospect. Zola is estimated by Tap to contain mean recoverable gas volumes of 1.0 trillion cubic feet with upside potential for 2.0 trillion cubic feet. The well will test the gas potential of several top and intra Mungaroo Formation sands – the primary reservoir at Gorgon. In addition it is possible that some Jurassic reservoirs may be developed flanking the main Triassic structure. The primary Mungaroo Formation target will be intersected at approximately 4,300 metres below sea level. Water depth at the well location is approximately 280 metres.

Zola-1 is planned to take approximately 40-50 days to reach to a final total depth of around 5,000 metres. Weekly updates will be provided during drilling operations.

Tap’s Managing Director and CEO, Troy Hayden, said he was pleased to have commenced the Zola-1 well which has the potential to deliver a resource several times larger than Tap’s current 2P reserves.

WA-290-P is a 482 km2 exploration permit located in the offshore Carnarvon Basin. The permit is immediately south of the giant Gorgon gas field and west of the Woollybutt oil field (Tap 15%) and contains the Zola prospect.

Located close to existing and developing gas infrastructure, Zola would have multiple potential development options should it be a discovery. Any development at Zola could also encompass the overlying Antiope gas discovery (estimated at ~120 Bcf).

Earlier this year Tap entered into an agreement with Apache to farmout a 10% interest in WA-290-P in consideration for Apache paying a promoted share of the costs of the Zola-1 well. Tap retains a 10% interest in the permit. 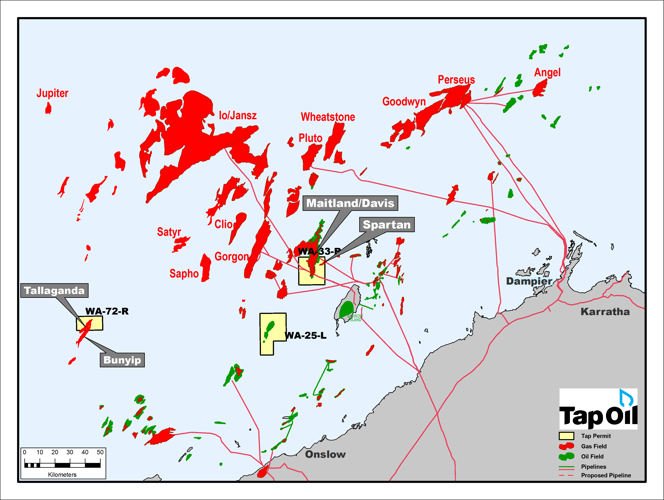