CAMAC Energy Inc., a U.S.-based energy company engaged in the exploration, development and production of oil and gas, announced that it has entered into an agreement with the Gambian Ministry of Petroleum (on behalf of the Government of the Republic of The Gambia) on the provisional award of two offshore exploration blocks, A2 and A5, in water depths of between 600-1,000 meters.

CAMAC Energy will be the operator with 85% interest in the blocks, which cover a total surface area of 2,666 square kilometers. Gambia National Petroleum Company will be carried at 15% through first oil. The agreement sets forth the negotiated fiscal terms and work program for the two blocks, and this award is subject to submission of an Environmental Impact Assessment (EIA) and signing of final petroleum exploration licenses within 90 days. The EIA report has now been submitted by the Company, and signing of the license documents is expected in the next few weeks.

The two exploration blocks are located in the highly prospective West African Transform Margin, home to several recent major discoveries in Ghana (Jubilee, Odum) and Sierra Leone (Venus, Mercury). In addition, in 1979 Chevron drilled the Jammah-1 well on the basis of sparse 2D data in block A2. The well had gas shows, thereby establishing the presence of hydrocarbons in the area. More recently, extensive 3D seismic shot on the two Gambian blocks A1 and A4, immediately west of the blocks A2 and A5, has revealed a number of material prospects and leads according to the operator, African Petroleum Corporation Limited . According to African Petroleum’s third party estimates, one of the prospects, the Alhamdulilah prospect, has potential mean unrisked resources of approximately 500 million barrels.

Chairman and CEO Dr. Kase Lawal commented, “We are extremely pleased to be awarded these two blocks. Gambia’s blocks A2 and A5 represent highly sought after assets in one of the world’s most exciting hydrocarbon provinces, the West African Transform Margin. Today’s announcement demonstrates additional progress in our frontier exploration strategy. It also reaffirms the Company’s reputation as a value added oil and gas partner to National Oil Companies in Africa.” 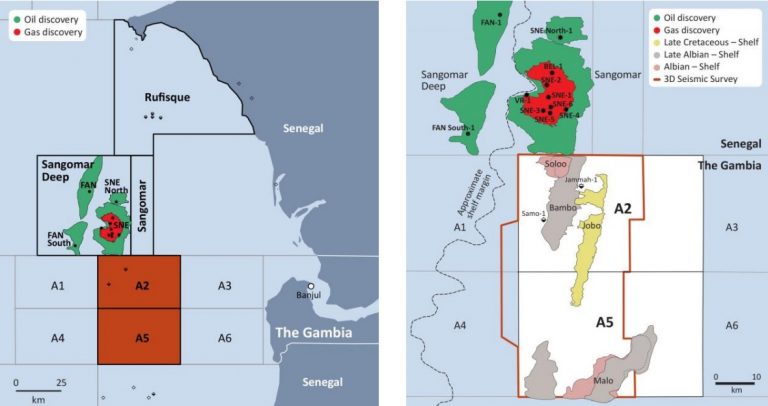