Advertisement
Back to overview
Home Fossil Energy ConocoPhillips to spend $5.5B per year in next three years

ConocoPhillips to spend $5.5B per year in next three years

Oil and gas major ConocoPhillips plans to spend about $5.5 billion a year on capital projects in the next three years as long as oil prices stay above $50 per barrel.

ConocoPhillips will hold an analyst and investor meeting on Wednesday to outline its 2018-2020 operating plan and strategy for long-term value creation.

The three-year plan averages annual capital expenditures of $5.5 billion, based on a flat real West Texas Intermediate (WTI) price of $50 per barrel, and targets strong performance on several value-oriented metrics, the company said.

These include greater than 20 percent cash return on capital employed (CROCE) by 2020; sustaining capital of $3.5 billion; less than a $40-per-barrel average sustaining price; greater than 30 percent payout of cash provided by operating activities to shareholders annually, including dividends and share buybacks; extending the $1.5 billion per year of share buybacks for an additional year through 2020, resulting in total 2017-2020 share buybacks of $7.5 billion.

It also includes debt reduction to $15 billion in 2019; total share buybacks of $7.5 billion and debt reduction to $15 billion will represent a 20 percent decrease in debt-adjusted share count by year-end 2020; approximately 5 percent underlying production compound annual growth rate (CAGR) and over 5 percent cash margin CAGR, resulting in more than a 10 percent cash flow CAGR; improvement in financial returns driven by disciplined investments in the company’s resource base of 15 billion barrels of oil equivalent with an average cost of supply of less than $35 per barrel.

The oil major reduced its capital spending for 2017 twice this year. Namely, the company slashed its initial guidance of $5 billion to $4.8 billion in July and then to $4.5 billion in October.

“During 2017, we significantly transformed ConocoPhillips to succeed across a range of commodity prices,” said Ryan Lance, chairman and chief executive officer.

“Through accretive asset sales and an ongoing focus on capital and cost efficiency, we’ve lowered the capital intensity and sustaining price of the company, reduced the cost of supply of our investment portfolio, substantially strengthened our balance sheet and returned a significant portion of cash flow to our owners. We believe we’re uniquely positioned to generate free cash flow, deliver top-tier distributions to shareholders and improve financial returns, while executing the business in a safe, socially and environmentally responsible manner.”

Lance added: “We want to be the company that can attract and retain capital to this sector by offering superior returns to shareholders through cycles. Today we will provide a clear, measurable plan to achieve this goal.” 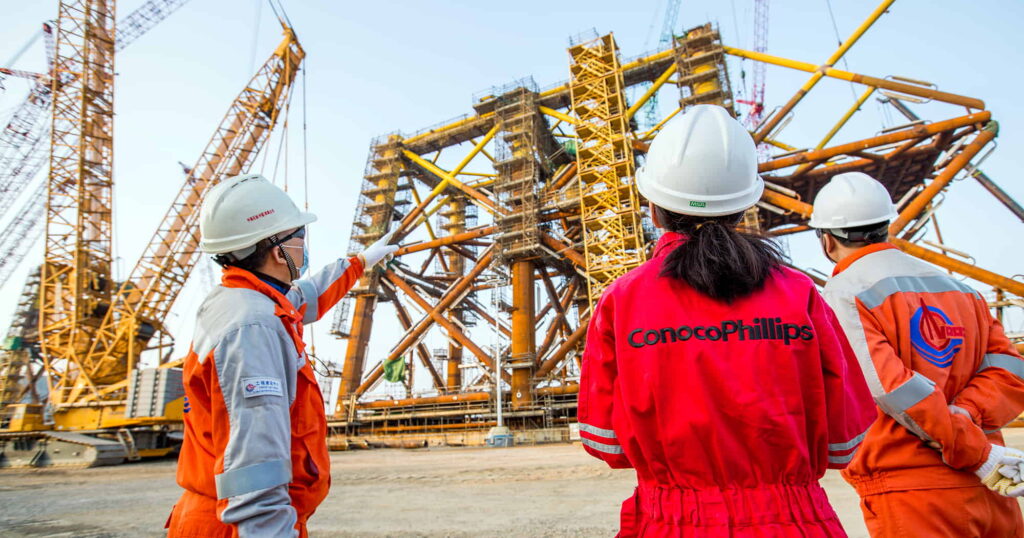