Offshore solar developer Oceans of Energy and The Seaweed Company have installed the world’s first combined offshore solar and seaweed farm in the Dutch North Sea as part of the demonstration project to showcase the sustainable multi-use of the marine space.

The combined offshore solar and seaweed farm has been installed at the North Sea Farmers test site, located 12 kilometres off the coast of Scheveningen.

The offshore solar and seaweed farms use the same space at sea to generate both solar energy and produce food, and thus serve as an example of how the space between the offshore wind turbines off the Dutch coast can be used in the future, according to Oceans of Energy.

Allard van Hoeken, CEO and founder of Oceans of Energy, said: “After a year of operating successfully on the North Sea with the first offshore solar system, I think it is very special that we have now succeeded in combining both the generation of clean energy and the production of food at sea, because this are two important necessities of life”.

Joost Wouters, CEO and founder of The Seaweed Company, added: “I am proud that with this project we can demonstrate that we can make maximum use of the space between the windmills at sea for the cultivation of valuable seaweed”.

The project is part of the European H2020United initiative that aims to stimulate sustainable multiple use of space within the European Union.

The world’s first offshore solar farm was successfully installed in 2019 in the North Sea off the Dutch coast by Oceans of Energy.

At that location, the system generated clean energy for a year, withstood the maritime climate and waves of up to 4 meters, surviving both Ciara and Dennis winter storms.

It is expected that at this second North Sea location, located further offshore, the system will have to withstand waves of 13 meters.

Should the demonstration prove successful, it would mean the system is ready for the realization of combined offshore solar and wind projects with 100 to 5,000 MW of offshore solar per project, according to Oceans of Energy. 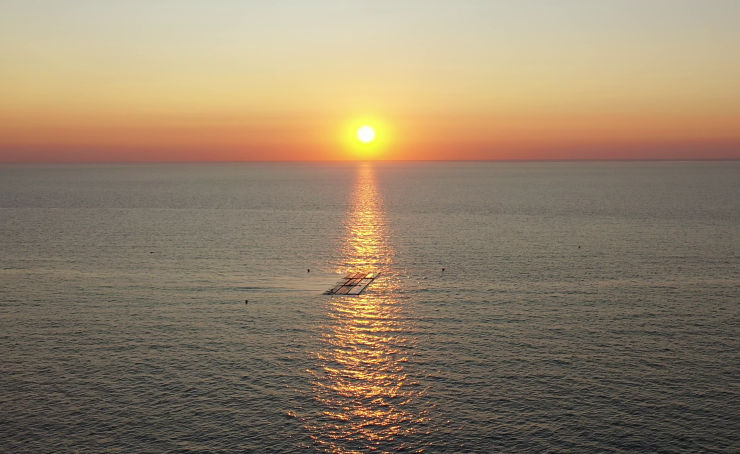