The Dutch Minister of Economic Affairs Eric Wiebes has announced that the Ten Noorden van de Waddeneilanden (TNW; North of the Wadden Sea Islands) offshore wind farm zone will connect to the national grid at a high-voltage station in Eemshaven.

The minister approved the Eemshaven West route after multiple cable route alternatives were considered for linking the 700 MW wind farm zone to the mainland. Possible connection points with high-voltage stations on the mainland that were considered include Burgum, Vierverlaten and Eemshaven.

The selected Eemshaven West route runs from the TNW zone to Schiermonnikoog island, comes ashore in Groningen and then connects to the national grid in Eemshaven.

According to the Ministry, the selected route passes through sparsely populated area and is less technically complex than other routes. For around 30 kilometres, the route goes through high-quality agricultural land, with the risk of salinization being a point of attention in these terms. Traversing the Unesco World Heritage and Natura 2000 area of ​​the Wadden Sea also requires careful integration, according to the Ministry, which added that the specific environmental effects will be investigated in the next phase.

The Eemshaven West route involves two possible transformer station locations, Waddenweg and Middenweg, both to be further developed in the coming months, after which their suitability can then be better assessed and the best alternative chosen.

North of the Wadden Sea Islands is part of the government’s Offshore Wind Energy Roadmap 2030 which sets out plans for the development of 7 GW of offshore wind capacity in the 2024-2030 period.

The project site is located some 85 kilometres off the north coast of the Netherlands. 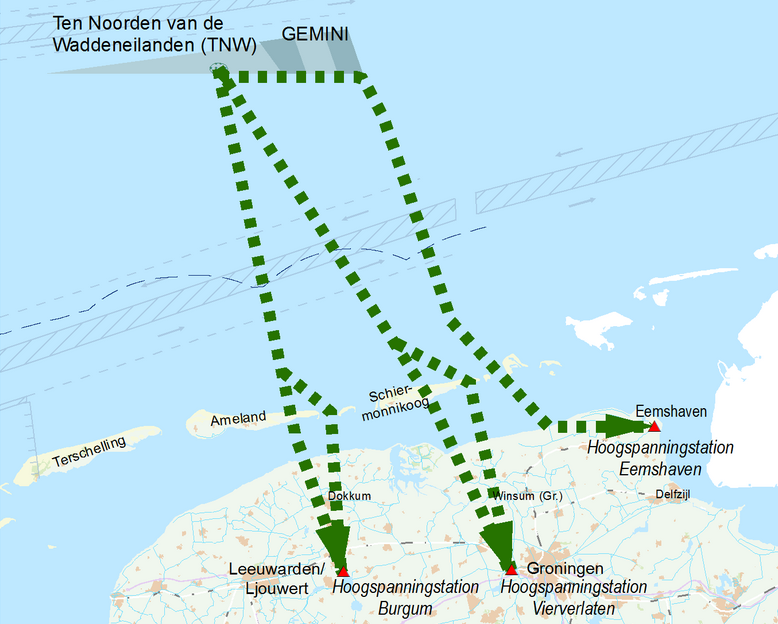