The rotary boiler, 24 meters in length, with a diameter of 4.4 meters, will be used in the food industry for processing grains and oilseeds, according to the Port of Hamburg.

It was transferred by HHLA’s Hamburg-based floating cranes directly into an inland waterway craft that is taking the vulnerable cargo along the Elbe to Melnik. From there, it will cover at least 300 kilometers by road to its final destination in Olomouc, Czechia.

As explained, the special challenge here was that on account of its center of gravity as the two HHLA floating cranes had to operate in tandem to lift the rotary boiler from the hold. For that, they first had to secure themselves together on the towering side of the 366-meter-long containership. The cargo was then lifted out and lowered on to the waiting inland waterway craft.

This year alone, COSCO has handled 80 especially heavy and/or out-of-gauge shipments via ports in the North Range, 70 of these in Hamburg. Yet this is never a routine matter. “Despite all our experience, handling this rotary boiler was something special. We had just six weeks to prepare for this load, but its weight and dimensions meant that it was by no means an everyday job,” Dennis von Gogh of COSCO’s special traffic team in Hamburg, said. 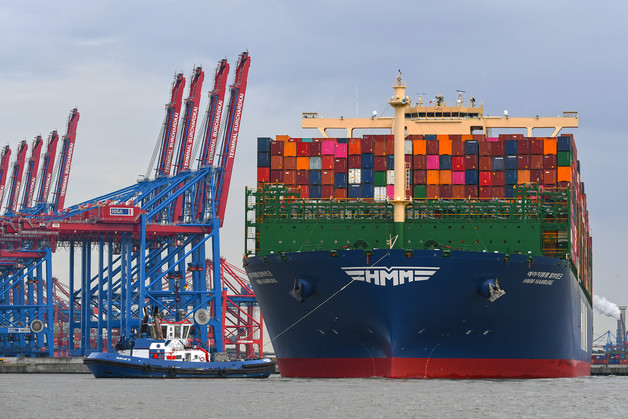