Guyana has approved the previously proposed farm-out of a share in CGX’s two offshore blocks in Guyana to Frontera Energy Corporation. 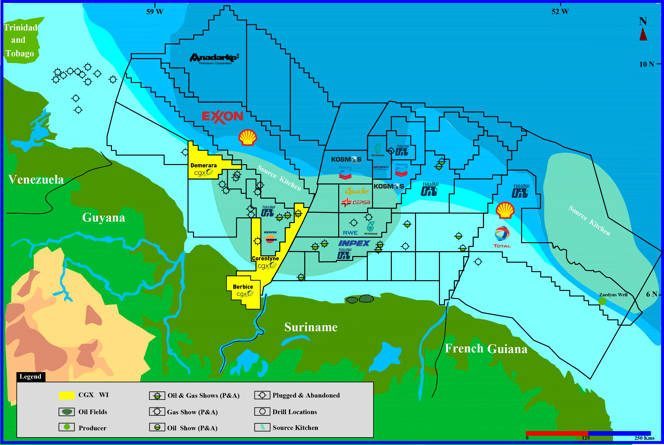 The signing bonus of $33.3 million will be paid by way of offset of $24.6 million of debt payable to Frontera by CGX plus a cash payment of US$8.7 million paid by Frontera to CGX.
Frontera has agreed to pay one-third of the applicable costs under the joint venture plus an additional 8.333% of CGX’s direct drilling costs for the initial exploratory commitment wells in the two blocks. CGX is the operator of the blocks.

Professor Suresh Narine, Executive Chairman and Executive Director (Guyana), CGX, said the partnership, along with recently concluded rights offering financing, allows CGX to “significantly clean up its balance sheet and resume with vigor its exploration of the continental shelf in the Guyana basin.”

“As oil and gas begins to play a pivotal role in the transformation of The Cooperative Republic of Guyana, CGX is delighted to be positioned to claim its place in the development of Guyana and this exciting new industry,“ Narine said.

Richard Herbert, Chief Executive Officer of Frontera, said: “We are very excited to be moving forward with our joint venture partner CGX on this important project for both of our companies and for the people of The Cooperative Republic of Guyana. Given the strong track record of discoveries in the adjacent Stabroek block and our own technical studies of seismic and well data within the two blocks, we are very encouraged about the opportunity on both the Corentyne and Demerara Blocks. We look forward to moving into the drilling phase to test the potential of the two blocks in the coming months.”

The nearby Stabroek block Herbert has mentioned is operated by ExxonMobil, where the U.S. major has struck 13 oil discoveries since 2015. It has been said that it might take at least 5 FPSOs to develop the billions of barrels discovered by Exxon.

As for the acreage that is part of the CGX-Frontera deal, the Corentyne block contains 1,125,000 net acres offshore Guyana in shallow water, adjacent to the ExxonMobil Stabroek block. The partners are required to drill the Utakwaaka well by November 27, 2019, with an additional exploration well to be drilled by November 27, 2022. The Utakwaaka well will be drilled by a Rowan jack-up.