A massive explosion occurred on Tuesday, August 4 in the vicinity of the Beirut Port Complex, wreaking havoc across the city and killing dozens of people.

The death toll which currently stands at around 100 hundred people is likely to further increase over the coming days, according to the Lebanese Red Cross. Around 4,000 people are said to have been injured.

The blast is believed to have originated from a chemical storage warehouse where an estimated 2,750 tons of ammonium nitrate got ignited. The material has reportedly been confiscated from a ship a while ago and stored there, but without proper safety measures.

Following the blast, the U.S. Embassy in Beirut urged its citizens to stay indoors and wear masks amid reports of toxic gases released in the explosion.

Lebanon Prime Minister wowed to hold those responsible for the accident accountable.

“Vessels and buildings within a 5km radius of the blast are believed to have been almost entirely destroyed,” Dryad Global said in a report.

“MERO STAR reports its hull has been breached, and injuries have been incurred. The Bangladeshi-flagged BNS BIJOY has also reported damage, and up to 21 sailors have been injured.

Three local tugs are believed to have been in close proximity to the explosion.”

United Nations Interim Force in Lebanon (UNIFIL) said one of the ships of the Maritime Task Force docked in the port was damaged, leaving some UNIFIL naval peacekeepers injured – some of them seriously.

“UNIFIL is transporting the injured peacekeepers to the nearest hospitals for medical treatment.

“UNIFIL is currently assessing the situation, including the scale of the impact on UNIFIL personnel.”

Dryad added that according to local sources almost all of the port logistical infrastructure has been destroyed. Footage from the scene from various media outlets indicates that much of the city’s port has basically been flattened by the explosion, with containers being scattered across the area.

The status of vessels alongside remains unknown.

The Beirut area has been declared a disaster zone, and all import traffic has been diverted to the port of Tripoli.

” The area surrounding the port location is not a key location associated with incident reporting. Furthermore, the risk to vessels intending to transit to or in the vicinity of Beirut is not immediately escalated as a result of this incident however on account of the cessation of all operations at the port and potential for chemical contamination, all vessels should avoid,” Dryad said.

The country has already been struggling with an economic crisis and a lack of medical supplies due to the coronavirus. The explosion, which is believed to have been one of two, has further aggravated the situation causing the country’s authorities to seek international assistance.

Several countries including Turkey, France, the UK, and Saudi Arabia offered assistance to Lebanon in overcoming the tragedy.

“I’d like to extend my deepest condolences to all those affected by the massive explosion at the port of Beirut today.  We are closely monitoring and stand ready to assist the people of Lebanon as they recover from this tragedy,” U.S. Secretary Michael Pompeo said in a statement.

“Our team in Beirut has reported to me the extensive damage to a city and a people that I hold dear, an additional challenge in a time of already deep crisis.  We understand that the Government of Lebanon continues to investigate its cause and look forward to the outcome of those efforts.”

Mediterranean Shipping Company (MSC) also expressed condolences to those affected by the explosion.

“MSC is in close contact with the terminal operator to understand the extent of any damage to the infrastructure and equipment and when the terminal will be operational again.”

Based on the latest update from GAC Lebanon provided to Offshore Energy-Green Marine, rescue teams are still working on moving the rubble as a lot of people remain missing.

“In the meantime, the Lebanese Armed Forces have closed all entrances to the port and are at present assessing the damages,” the update reads. 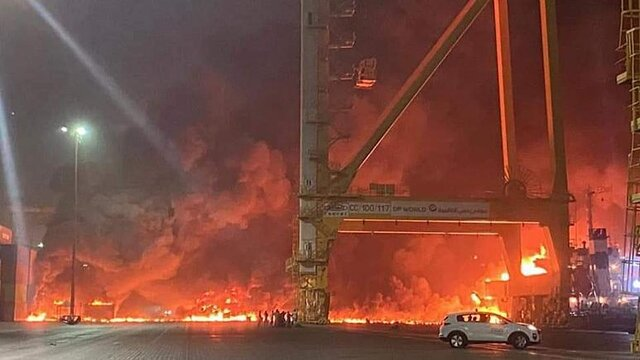