Independent Oil and Gas (IOG) has pushed back the final investment decision (FID) on Phase 1 of the Blythe and Vulcan Satellites Hubs projects to the first quarter of 2019 due to market volatility.

Development of the Blythe Hub and the Vulcan Satellites Hub, IOG’s core project, is a two-phase development plan in the UK Southern North Sea which will unlock 302 BCF of 2P gas reserves and provide a 38% internal rate of return (IRR) and £285 million ($364.5M) post-tax NPV10.

NPV10 is the present value of estimated future oil and gas revenues net of estimated direct expenses and discounted at an annual discount rate of 10%.

IOG said on Thursday that the core project was technically ready to enter the execution phase with all engineering work required for FID complete and commercial terms were substantially agreed with all major contractors.

Also, documentation is expected to be signed imminently for the purchase of the onshore Thames Reception Facility, where IOG’s fully-proven, 550 MMCF/d capacity Thames Pipeline lands at Bacton Gas Terminal on the North Norfolk coast.

According to IOG, the financing plan for the core project is expected to incorporate a senior secured bond issuance and the issue of new equity in IOG.

The company added that the current oil price volatility and capital market conditions were not conducive to deliver this financing plan before year-end. However, it is fully ready to progress its funding plans as soon as markets stabilize.

Therefore, IOG decided not to make the FID in 2018, but the objective would be to secure the financing to deliver this key milestone in 1Q 2019.

“The company is technically ready to achieve first gas within 20 months of the FID, during the second half of 2020 based on the updated FID target. Despite market volatility, the SNS commercial environment remains favorable to operators and the company is satisfied with its agreed contractual arrangements,” IOG said.

In October, IOG signed the Harvey East and Goddard 30th Round Licences, giving it 100% interest in both assets.

The company’s full portfolio, including both the core project, Harvey, and Goddard, potentially delivers a 76% IRR and a £739 million ($945.2M) post-tax NPV10.

Work on the Harvey appraisal well is still moving forward with an estimate of 63% geological chance of success. If successful, Harvey could hold low/mid/high of 85/129/199 BCF prospective resources.

As for the contractors, an LOI has been signed for the Ensco 72 rig to drill the well. The rig is contracted to another UKCS operator to drill two exploration wells before moving on to Harvey. It is expected on location in 1Q 2019 although weather delays could occur.

Also, an LOI was signed with Halliburton to provide offshore services for the well, Fraser Well Management was appointed as the well operator subject to regulatory approval while Fugro is completing the necessary well seabed location survey.

To fund the ongoing core project-related costs before FID, IOG agreed to use part of its Harvey loan with its major financial backer London Oil & Gas Limited (LOG) for corporate and development purposes.

LOG also agreed to discuss the refinancing of the Harvey loan to ensure the company remains funded for the Harvey well.

Andrew Hockey, CEO of IOG, said: “The company considers that the current equity and debt market conditions are not sufficiently stable for IOG to proceed to complete the funding process before the year-end. Having considered carefully and taken due advice, the board believes that it is in the best interests of shareholders to do so as early as possible in the New Year.

“In our view, this short delay to the existing timetable is likely to enable an optimal funding outcome and maximize the value for shareholders.

“The Harvey appraisal well is a low-risk, high-impact, near-term catalyst for shareholders and we look forward to providing further updates nearer to the spud date.” 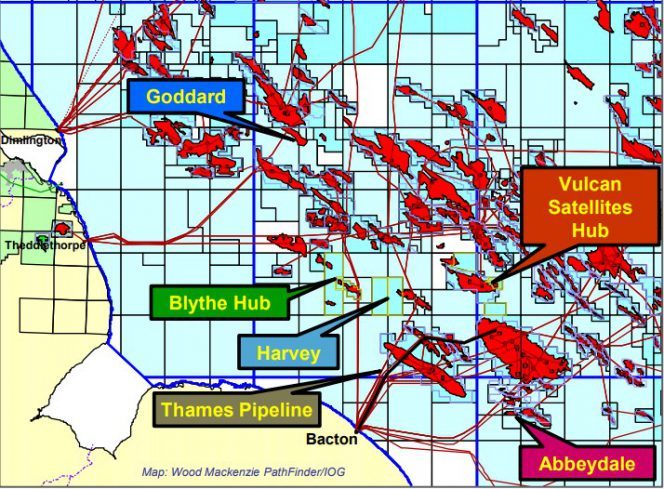