The project is supported by Japan’s Maritime Bureau of the Ministry of Land, Infrastructure, Transport, and Tourism (MLIT) as part of its programs to support research and development for advancing marine resources technologies.

As disclosed, the project, called Carbon Capture on the Ocean (CC-Ocean), is intended to achieve CO2 capture at sea, a world first.

K Line will collaborate with Mitsubishi Shipbuilding and ClassNK to install a small-scale CO2 capture demonstration plant onboard its vessel, conduct test operations of the plant, and measure its performance.

The marine-use CO2 capture demonstration plant will be based on an onshore plant and designed to capture a portion of a vessel’s gas emissions.

This project will aim to verify the efficacy of capturing and storing CO2 from a vessel’s gas emissions, as well as the operability and safety of CO2 capture facilities at sea.

The two-year project will begin in August 2020 with the launch of a HAZID (hazard identification) evaluation of the demonstration plant and deployment on vessels, with verification from ClassNK.

“This demonstration experiment conducted at sea is the first of its kind in the world. The knowledge gained will be used for future development of technologies and systems to capture CO2 from the exhaust gases of marine equipment and ships,” ClassNK said.

Mitsubishi Shipbuilding will begin development and construction of a small-scale CO2 capture demonstration plant and evaluation of system safety.

In the middle of 2021, Mitsubishi Shipbuilding is scheduled to test the operation of the demonstration plant at its factory, followed by deployment of the plant on K Line’s Corona Utility, a thermal coal carrier operated for Tohoku Electric Power Co.

By the end of fiscal 2021, the project partners are expected to start operating the demonstration plant on-board the vessel and measuring the system’s performance under marine conditions.

” Additionally, the captured CO2 is expected to be recycled as a new CO2 source for Enhanced Oil Recovery (EOR) processes or as raw material in synthetic fuel through methanation. In this way, the project will significantly contribute to the long-term reduction of greenhouse gas emissions.“

The CC-Ocean project is part of K Line’s Environmental Vision 2050. 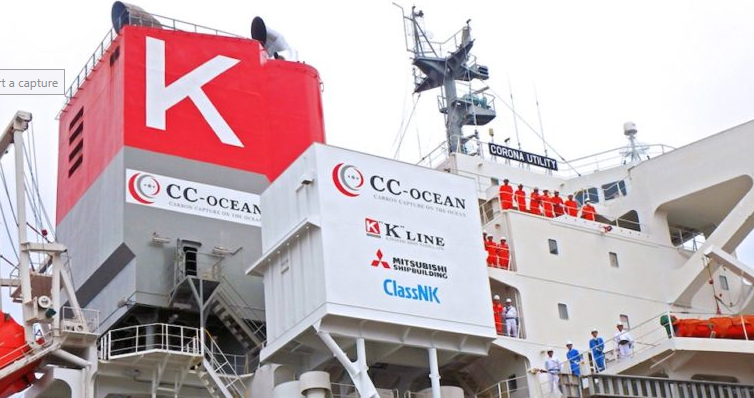