Mainstream Renewable Power is currently in arbitration with the Low Carbon Contracts Company (LCCC) over the terms of its CfD contract for the 450MW Neart na Gaoithe offshore wind farm in the outer Firth of Forth, Scotland.

The project has supposedly lost the CfD due to an ongoing judicial review requested by the Royal Society for the Protection of Birds (RSPB) last year.

On 29 March 2016, LCCC issued a notice which, in its view, terminated the project’s CfD. NnG said that it ”strongly disputes the validity of the termination notice.”

”NnG continues to work hard to ensure that this £2 billion significant energy infrastructure project will be built as planned against a backdrop where the Judicial Review process in respect of the Section 36 consent of four offshore wind farms, including NnG, under the Electricity Act 1989 is on-going,” NnG said in a statement.

”All substantive elements of the project are in place, including the investment consortium, major contractors and the required £2bn of construction financing for the project. This project will make a major contribution to meeting Government energy security and climate change targets at the lowest cost to consumers, and we look forward to bringing it to market.”

Located in the Outer Forth Estuary in the North Sea, the Neart na Gaoithe offshore wind farm initially secured a fifteen-year Contract for Difference (CfD) from the UK’s National Grid in March 2015. With a CfD strike price of GBP 114.38/MWh, the wind farm was set to offer the cheapest offshore wind-generated electricity in the UK.

At the beginning of this year, Mainstream Renewable Power said it was in exclusive discussions with a consortium led by the power company InterGen to take the offshore wind farm to financial close and into construction. 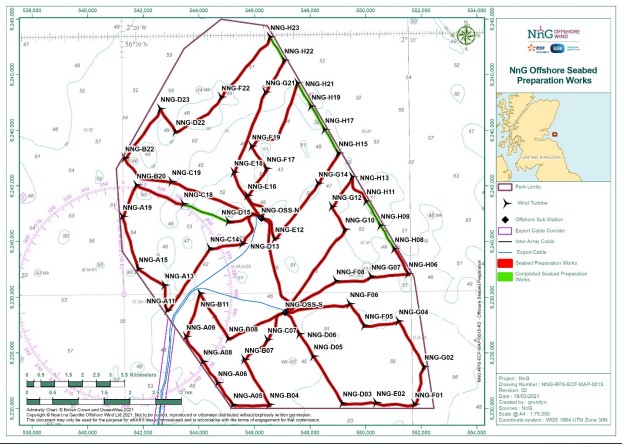