Det norske oljeselskap ASA  has discovered more oil in Draupne. The oil discovery ranks as one of the largest on the Norwegian shelf in recent years and a fast development is likely.

A combined development of Draupne and the two neighbouring discoveries Hanz and West Cable holds total estimated recoverable volumes of between 110 million and 150 million boe.

Det norske Chief Executive Erik Haugane is optimistic with respect to a development of this area:”The volumes we are looking at now are larger than previously estimated, and we will continue to work on development solutions that could yield first oil already in 2014. With support from our partners, we could file a plan for development and production next year.”

Det norske discovered Draupne in 2008. On 22 April this year, Det norske announced that a successful production test had been carried out in appraisal well 16/1-11. Results from the test showed that future production wells could yield rates of about 12 000 barrels per day of good quality oil. Neither the discovery well nor the appraisal well detected how deep down the oil column goes, a necessary parameter in order to estimate recoverable volumes. Thus, it was decided to drill a sidetrack well, targeting a deeper part of Draupne (well 16/1-11A).

The oil-water contact was found in the sidetrack well. This proves that the oil column is deeper than previously expected. The total oil and gas column is about 150 metres, of which 90 metres are gas. The proven hydrocarbons have good characteristics. This forms the basis for a development with robust economics. Det norske is looking at a development of Draupne in connection with the two discoveries Hanz and West Cable, located north and west of Draupne, respectively.

“We consider that a development of all these three fields have total recoverable volumes of between 110 million and 150 million boe”, Det norske Vice President Odd Ragnar Heum said.

The semi-submersible drilling rig Songa Delta, which is on contract to Det norske and Wintershall, will now mobilise to drill a well for Wintershall in PL 475. The next drilling operation that Songa Delta will perform for Det norske is on the Stirby prospect in PL 341, with expected start-up in July. 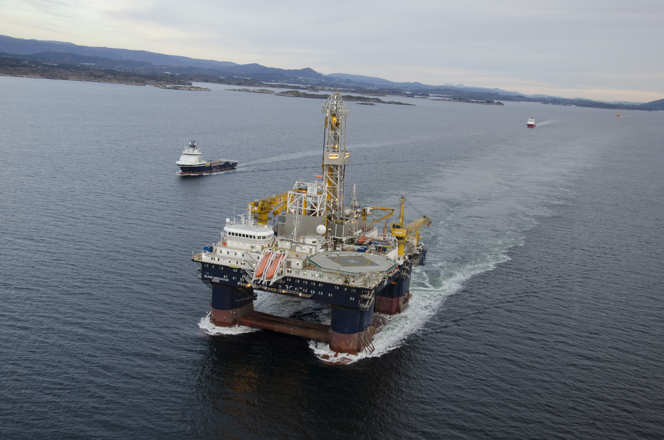