Browsing through Linkedin the other day, I’ve stumbled across a beautiful photo of two heavy lift vessels carrying the giant Aasta Hansteen topside out of the Westcon yard in Ølensvåg, Norway. 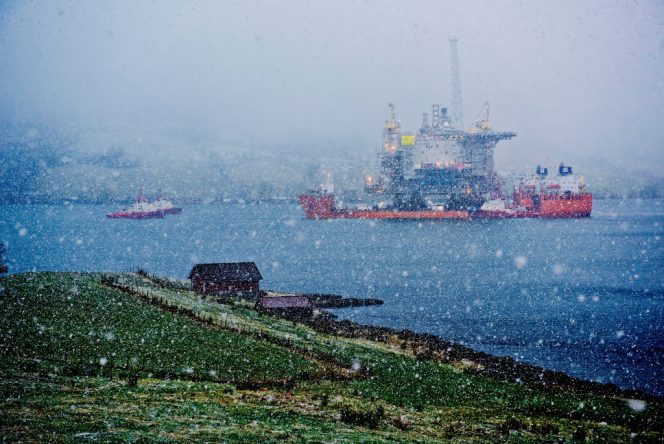 The vessels were taking the topside to Digernessundet near Stord, where it would eventually be mated to the lower hull, becoming Norway’s first, and the world’s largest truss spar platform. However, this is not about the Aasta Hansteen per se. It’s about the photographer.

We’ve shared thousands of beautiful company-supplied photos of offshore installations, and what I’ve come to realize, the photographers who frame those shots often get overlooked, with only their name placed in the caption of a photo, sometimes not even that.

To rectify this, Offshore Energy Today has reached out to the author of the said photo, Øyvind Sætre. As one of the best photographers in the offshore oil and gas industry trade, he was a perfect go to person to learn more about the offshore photography, motivation behind it, processes, ideas, thoughts, equipment…and to obtain more beautiful offshore photos and share them with the world.

Øyvind, 45, started taking photos very early. And when I say very early, I mean it.

“Ever since I was a child, I’ve been taking pictures. I took my first picture, of my mother, when I was just two and a half years old.” 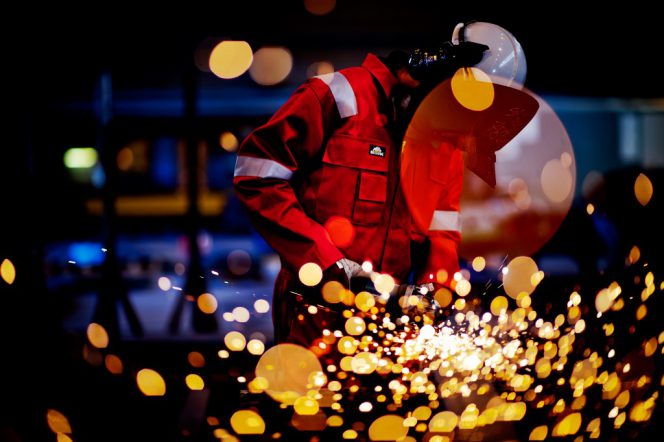 Apart from the early introduction to photography, he was also introduced to the offshore oil industry early in life.

“My nanny worked in the Statfjord field in the 70s and 80s, and every time she returned back onshore, she brought me t-shirts, pictures from the North Sea, small bottles of oil, and even my very first helmet. When the rig she worked on, Polymariner, arrived at Haugesund Mekaniske Verksted (HMV) for repairs and maintenance, she invited me onboard. I was 8 years old, and it was just a thrilling experience for a kid,” Øyvind says.

There is this ever present debate among photographers on which brand is better, Canon or Nikon. Øyvind is a Nikon user. But his first camera was not a Nikon.

“Kodak Instamatic. I’ve still got it. I bought my first SLR-camera, a Nikon F301, as a teenager in the early 80s. Since then, I’ve stuck to Nikon. Their ergonomics suits me.“

However, whatever the camera, Øyvind thinks, and I agree (if I may) that the camera is just a tool. The photographer and his vision is what matters the most.

“Now, I regard cameras just as a tool. They’re brilliant small computers, but they know nothing of visual aesthetics or visual storytelling.”

While he uses Nikon, he says the brand is not important, “as long as they [the cameras] work absolutely every time I need them, in all those kinds of rough settings I encounter in my job.” 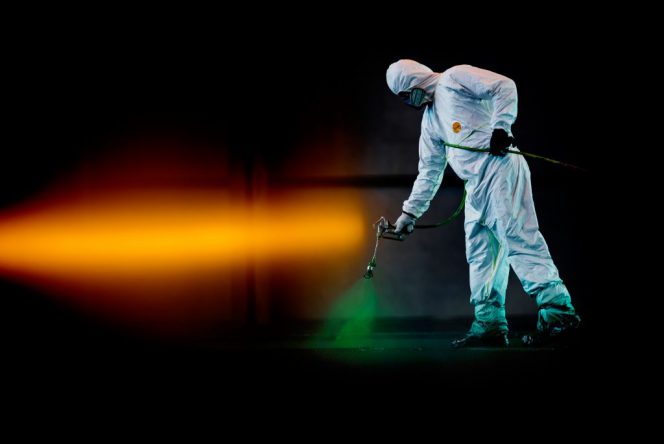 Wanted to become a naval architect

At first, he didn’t know he’d become a photographer. He wanted to become a naval architect, however, maths and physics came in the way.

“Not caring much for either mathematics nor physics, I quickly discarded that dream. It was always the visual side of things – drawing rigs and vessels, and photographing them, that attracted me.”

That’s how he ended up with a degree in photojournalism. He started working professionally as a photographer in 1994, doing both newspaper work and industrial photography.

He then, a decade ago, decided to focus solely on industrial photography: “I never looked back.”

“My work has taken me all over Norway, both onshore and offshore, to several European destinations, as well as the Far East and the USA. Photography is all about identity. We who live along the coast of Norway, live with this industry every day. It affects us on a daily basis. And it has become a natural part of our genes, so to speak,” he says.

His first professional project related to the offshore industry was photographing the construction of the Troll C, a steel-hull floating process and accommodation platform now deployed at the Troll field in the North Sea, offshore Norway.

Øyvind: “The fabrication environment has always been the backbone of my business. The first industry project I took on, was the building of the Troll C platform at the yard here in Haugesund (then UMOE Olje & Gass, now Aibel). I followed the project from first steel to sail away. Since then, a lot of similar projects followed – right up to the construction of the Johan Sverdrup Drilling Platform, currently being built by Aibel, and destined to sail in 2018.”

Øyvind client’s list on his website shows the well-known names such as Songa Offshore, ConocoPhillips, Eidesvik, Aibel, to name a few. 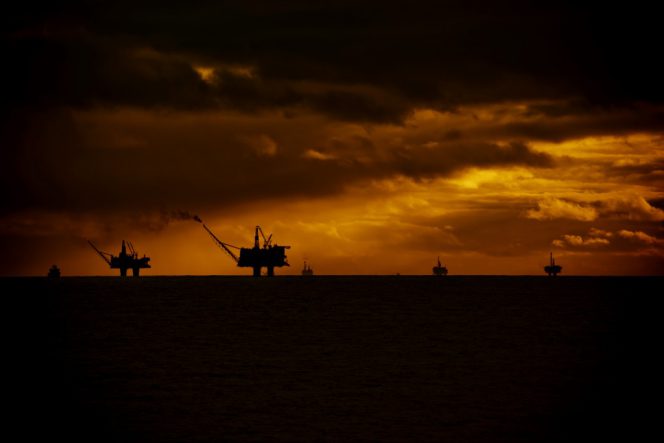 Industry photos can be exotic too

As mentioned above, Øyvind feels the photographer’s eye and visual aesthetics is what’s important, not necessarily the equipment.

However, we also wanted to know, given his work is focused on the oil and gas industry, how hard is it to find beauty in giant steel facilities, rigs, platforms…

“Things are what they are. Surroundings may be dark, dusty, dirty and greasy. And they might be those of newly welded, freshly painted and shiny steel. Pure artworks of engineering. It’s how you treat the subjects that matters. How you frame, how you light, or choose not to. How you treat the existing light. Flash is forbidden in processing areas, so I usually work with existing light only.

“To me, even dark and dusty might certainly be aesthetic. I’ve got people having my welding pictures hanging in their living room. It’s part of an environment that is off limits to most people. So it becomes exotic.”

OET: While offshore photography can be exotic, there is also a question of safety?

Øyvind: “Taking care of your own safety is paramount in all kinds of industrial photography. Observe the basic rules, and follow them. Always identify potential risks, and be aware of how to avoid them. In several of the environments I work, photography is classified as hot work, requiring hot work permits.  I’m also fully certified, holding an offshore course, incl. HUET, including Helicopter Underwater  Evacuation Training.

There is a good reason Øyvind  has the Helicopter Underwater Evacuation training certificate. Namely, he prefers taking aerial photography from inside a helicopter, rather than using a drone.

“Drones are a very handy tool, but they require professional operators. I’ve seen too many amateurs handling them in ways that are totally unacceptable to public safety. Personally, I like to shoot aerials from helicopters. Nothing much beats that kind of adrenaline rush.” 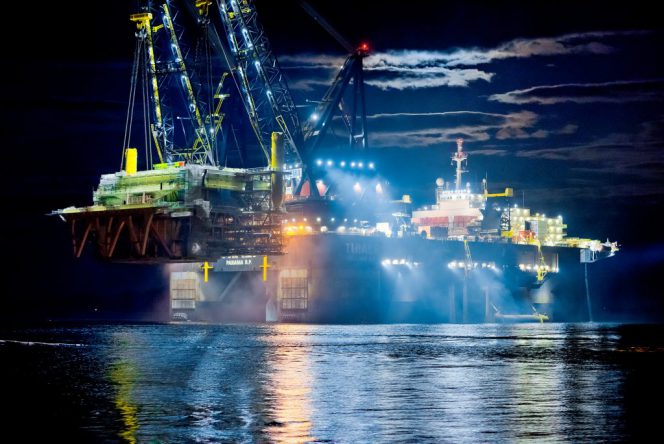 Every line of work has its own challenges. Apart from the above-mentioned safety perspective, there’s one thing that Øyvind has highlighted – the weather.

“Weather. You can’t wait for the right light, you’ve got to shoot while things actually happen, be it day or night time. I always embrace the possibilities, not what restricts me. That’s my mantra.”

Speaking about the weather, I asked Øyvind to describe the weather conditions while photographing the Aasta Hansteen topside (the first image in the article).

Also, many a fashion photographer will tell you it can be quite difficult to direct a model on how to strike a good pose. Can you imagine what this means when taking photos of giant rigs? If you can’t, here it is…

Øyvind: “I’m not afraid of asking for services that can benefit my photography. Once, I actually had a semi drilling rig, testing equipment in a Norwegian fjord, turned around 180 degrees by the tugs assisting it, so the light – and the pictures – would be even better. What a day at the office.” 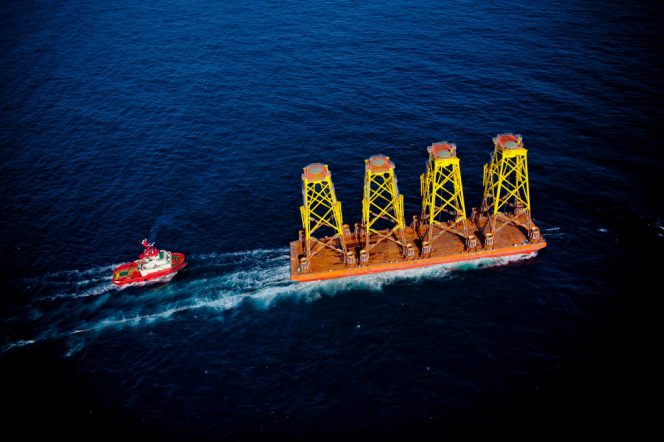 As many of our readers will know, the oil and gas industry has suffered in the past few years after the oil prices fell from $115 to below $30 at one point, before stabilizing at around $60 or so in the past few months.

OET: Øyvind, have you, as an offshore oil and gas industry photographer felt the industry downturn on your own skin?

Øyvind: “2016 and 2017 have certainly been different, with less traveling, and several projects that were never realized. At the same time, this gave me some valuable extra time personally, which I really needed after some very busy preceding years.“

While Øyvind is enjoying some extra personal time (but still working as you can see by the photos here) I asked him to give a piece of advice on what’s most important for aspiring photographers wanting to go down a similar, industry photography, path.

The word of advice is brief but to the point: “Industry knowledge. Only then, you will fully understand the clients’ needs.”

And where better to gain the knowledge than on Offshore Energy Today. 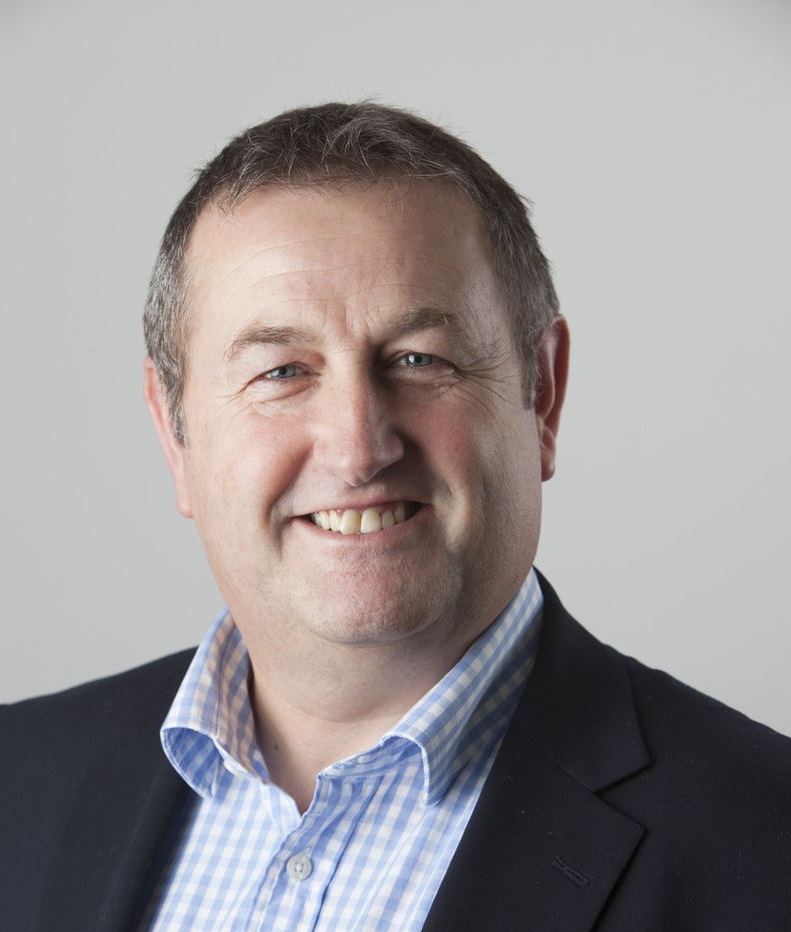