The Norwegian shipping industry is teaming up and has taken a leading role in developing battery-powered ships. The first four hybrid vessels will start to sail in 2013/14. In 2015, they will be followed by the world largest fully electric ferry, which will regularly cross Norway’s largest fjord.

Some 120 managers representing the entire maritime cluster were gathered at a DNV seminar last week. “15 years ago, the Norwegian cluster was looking into opportunities for gas-fuelled ships. Today, Norway is the front-runner when it comes to LNG-fuelled ships. Electricity stored in batteries on board ships is another opportunity in the future energy mix and another technology race has started. We have been running that track for a while already,” says Narve Mjøs, Director of Battery Projects in DNV and in charge of the seminar.

“International shipping is facing a tough time with escalating fuel prices, stricter environmental regulations and very low day rates caused by overcapacity in most segments. It’s during tough times that innovation is most important and also more efficient, as the purpose and goals become so much clearer,” says Remi Eriksen, CEO of DNV Maritime and Oil & Gas. “The Norwegian maritime industry is at the innovation forefront, and the world looks to Norway for technology and best practice. Innovation is not only something the industry wants. It is also necessary for survival.”

The first evidence of battery innovation, the first hybrid offshore supply ship, will start to operate within a few weeks. The Viking Lady, owned by Eidesvik Offshore, will have a battery package installed this spring. Later on, Norled will install a battery package on board an existing diesel-electric ferry. Norled intends to use this experience in building and operating their fully electric ferry. This will cross the Sognefjord 34 times a day, 7 days a week, transporting at a maximum 120 cars and 360 passengers – starting in 2015.

The Edda Ferd, owned by Østensjø, is another hybrid vessel with battery and diesel-electric propulsion that will start to sail this autumn.

Hybrid systems will reduce the energy consumption. When an offshore supply vessel is operating on dynamic positioning, there will be a major fuel saving potential. And when in harbour, the vessel should be able to simply use power stored in the batteries, which again will have a positive impact on the environment. Additional benefits are related to the reduction in the machinery maintenance cost and in noise and vibrations.

“Hybrid ships are similar to the well-known hybrid cars, like the Toyota Prius,” says Remi Eriksen. “A major advantage of these ships is that the payback time on additional investments is expected to be 2-4 years compared to more than 10 years for cars.”

Eriksen drives a fully electric car himself. Car industry figures can be used to illustrate how batteries are perceived as an alternative in Norway and as an example of the attention paid to them. Every fifth electric car sold in Western Europe in 2011 was sold in Norway, while in total only one out of 100 Western European cars were sold in this country during the same year.

The trend towards more use of electricity and batteries on board ships is expected to continue. New rules, tools and advisory services for battery-powered ships have already been developed by DNV. The Norwegian authorities are taking an active role, as they did when gas was being developed as an alternative fuel, and are pushing the maritime industry by setting strict requirements to reduce emissions, as well as offering incentives. As a result of last week’s seminar, yards, owners, the supply industry and R&D institutions are all eager and well prepared for the future. 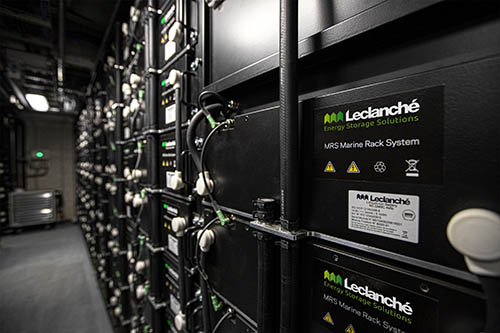