This ship order is a part of a bulk carrier fleet development aimed at achieving net-zero greenhouse gas (GHG) emissions in the NYK Group‘s oceangoing businesses by 2050.

According to NYK, the vessels are expected to emit 80% less NOx, and 30% less carbon dioxide (CO2) and no sulphur oxides, compared to existing conventional heavy oil-fueled vessels.

The IMO-adopted MARPOL Convention is the main international convention covering the prevention of the pollution of the marine environment by shipping. In line with MARPOL Annex VI that came into effect on in May 2005, NOx emission controls (tier I controls) for diesel engines installed on vessels were implemented in Japan.

Moreover, a third control was adopted in 2008, targeting vessels to be constructed from 2016 and limited to emission control areas, to seek the reduction of NOx emissions by about 80 percent from that of the first tier.

“Going forward, we will continue with the gradual planned introduction of LNG-fueled vessels until the realization of zero-emission vessels that use marine fuels such as hydrogen or ammonia, which would have an even lower environmental impact,” NYK stated.

Two months ago, the firm sign a deal to convert its LNG-fueled tugboat Sakigake to operate on ammonia fuel. The tugboat, operated in Tokyo Bay by NYK Group company Shin-Nippon Kaiyosha Corporation, is scheduled to be converted by 2024. The fuel modification contract has been signed with Keihin Dock Co., an NYK Group company. 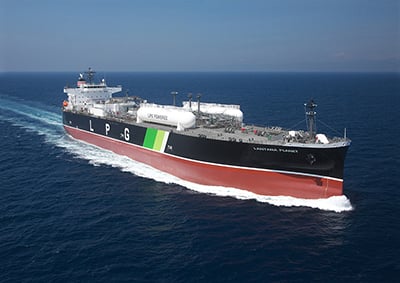